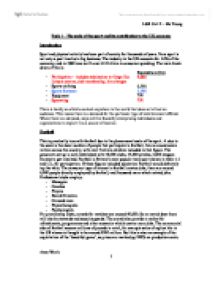 Task 1 - The scale of the sport and its contribution to the UK economy Introduction Sport and physical activity has been part of society for thousands of years. Now sport is not only a past time but a big business. The industry in the UK accounts for 1.6% of the economy, and in 1998 was worth over �11 billion in consumer spending. The main break down of this is: - Participation - includes admissions to things like Leisure centres, club membership, hire charges - Sports clothing - Sports footwear - Equipment - Spectating There is hardly an athletic contest anywhere in the world that does not attract an audience. This means there is a demand for the particular type of entertainment offered. Where there is a demand, ways will be found by enterprising individuals and organizations to exploit it as a source of income. Football This is practically true with football due to the phenomenal scale of the sport. A clue to the scale is the shear number of people that participate in football; this is around seven million across the country, with over 5million children included in that figure. The grassroots set up is well established with 40,000 clubs, 45,000 pitches, 2,000 leagues Its easy to get involved. Football is Britain's most popular team sport shown in table 1.1 and 1.2., for participation. If these figures included speciation Football would definitely top the table. The consumer type of interest in football creates jobs; there are around 6,000 people directly employed by football, and thousand more which related jobs. Professional clubs employ: - Managers - Coaches - Players - Board Directors - Grounds men - Physiotherapists - Psychologists For premiership clubs, crowds for matches can exceed 60,000. So on match days there will also be stewards and security guards. The crowd also provide a market for refreshments, programmes and other souvenirs which creates more jobs. ...read more.

The internet has thousands of websites that offer football results, fixtures, statistics and facts. Using a search engine on the internet with football in the UK as the specification over 7 million sites are retrieved. In comparison if we do the same thing for hockey there a mere 1 million results and its also possible a significant number of these are orientated around ice hockey. The technology is such now that its possible to view matches over a broadband connection, this is a new idea but there are already companies set up to provide the service, 'the-football.com' are striving to make video or live broadcast on demand of your favourite team anywhere in the world possible. Another plan that had the potential to revolutionise football further was the media buying into clubs or in fact taking them over. In 1999 the satellite operator 'BSkyB' attempted to take over Man United Football Club with a bid worth over �600 million. This offer was blocked by the government is it was deemed to have the to potential to corrupt the sport. But in the future it's not unlikely that more deals like this could be offered, it's a question of how long the sport can withstand this pressure. The AC Milan owner Silvio Berlusconi has a vision for an extensive media network he said "One day coverage of football will be so wide-ranging that we will have to let the fans into the stadium free of charge." Task 5 Sports coverage used to be restricted in its audience size, usually limited to those present. But this was before mass media, there problem anymore, its possible to broadcast a sporting event to practically anyone in the world using television, radio or digital media using the internet. But to make it worth while for the media companies, there has to be a wide audience and interest in the sport, hockey meets its problem here, with no great following there no real demand for regular coverage. ...read more.

Technology has helped to progress the game of hockey greatly. The majority of players now play with a composite stick, which incorporates different materials to reach a desire product with the prefect properties. The main substance used id carbon fibre; it's strong but much lighter than wood. These new sticks provide more power from the same amount of energy, this has upped the speed of the game and the also made it easier for certain groups like children to play a better standard of hockey (see next page for some examples). The game is now played almost exclusively on Astroturf, an artificial surface either sand based of water based. The surface is flat and has much less resistance than grass so has helped to make play faster and more accurate. But there is a down side, it's already evident that the impact running on astrotruf puts a crippling amount of pressure on the knee joint, so sadly it's anticipated that there won't be many older people continuing to play the game into their 40's in years to come, because a lot of them will have knee problems. The global success of football and the media portrayal has meant the public are constantly subjected to it. It now has a role in everyday life, affecting lots of things including the way we dress. Clothing that was originally designed for sports men and women. For example like trainers and tracksuits bottoms are now worn regularly as casual wear. This has created a multi billion pound industry, one source estimating spending on sports clothing at �2750million a year. It is a healthy industry because the sector of the market that buy for participation will look for quality rather than bargains. Although "spending grew by only 2%, with sports clothing and footwear taking slightly lower shares of the overall clothing and footwear markets in 2001 than in 1997" (http://www.researchandmarkets.com/reportinfo.asp?report_id=3896&cat_id=136) this can be put down to the increasing popularity of demin and the non-sports wear look. ...read more.