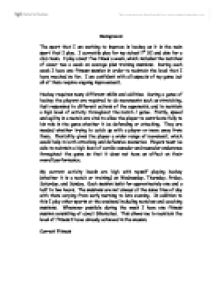 Background The sport that I am working to improve is hockey as it is the main sport that I play. I currently play for my school 1st XI and also for a club team. I play about five times a week, which includes the matches of about two a week on average plus training sessions. During each week I have one fitness session in order to maintain the level that I have reached so far. I am confident with all aspects of my game but all of them require ongoing improvement. Hockey requires many different skills and abilities. During a game of hockey the players are required to do movements such as stretching, fast responses to different actions of the opponents, and to maintain a high level of activity throughout the match / game. ...read more.

Whenever possible during the week I have one fitness session consisting of about 30minutes. This allows me to maintain the level of fitness I have already achieved in the season. Current Fitness I have completed fitness tests in order to see what level I am at in different aspects of my skill and ability. Fitness Test My results (average) National Average 20 metre sprint 3.05 seconds 5 metre sprint 1.13 seconds Sit and Reach 29 centimetres Bleep Test 120 lengths / level 12 SAQ Agility Tests I play in a defensive position in a game of hockey and therefore I must have quick reactions in order to be able to respond to the movements of my opponents. Also I need to be able to stay with the opponent when marking them and this requires both speed and endurance. ...read more.

It would allow me to stay with them and keep put pressure on them rather than me always trying to catch up with them which does not put as much pressure on. They would not have as much time to prepare themselves as I would be there in a much shorter time. Agility would have an improvement on every aspect of my game whether it is defensive or attacking. It would improve my time it takes to change direction and also allow me to work better at different levels whether it be up or down. Endurance would improve my game all round also especially in the last quarter of the matches. I would be less fatigued and therefore less likely to make a rash decision or to play a bad pass which normally happens when a player begins to get fatigued. This would put me at an advantage against most other players, as I would be able to react to different situations more appropriately. ...read more.