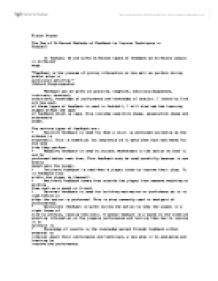 The Use of Different Methods of Feedback to Improve Techniques in Football.

Kieran Dignan The Use of Different Methods of Feedback to Improve Techniques in Football In football we are given different types of feedback by different people in different ways. "Feedback is the process of giving information on how well we perform during and/or after a particular activity." (Oxford Encyclopaedia) Feedback can be given as positive, negative, extrinsic/augmented, intrinsic, terminal, concurrent, knowledge of performance and knowledge of results. I intend to find out how each of these types of feedback is used in football, I will also see how learning stages affect the type of feedback which is used, this includes cognitive phase, associative phase and autonomous phase. The various types of feedback are: * Positive feedback is used for when a skill is performed correctly so the outcome is successful. This is essential for beginners as it gets them more motivated for the next time they perform. * Negative feedback is used to correct weaknesses in the action so that it can be performed better next time. This feedback must be used carefully because it can easily demotivate the player. * Intrinsic feedback is used when a player looks to improve their play. ...read more.

"Learning is a more or less permanent change in performance brought about by experience" (Knapp, 1973) The first stage of learning is the cognitive phase and is aimed for beginners. The learner gets initail ideas on how to perform a skill by gathering information such as watching a demonstration. Then the next step is to attempt to perform the skill by themself. After, the person guiding them will give them extrinsic feedback to encourage them or to tell them how to improve. The feedback should mostly be positive at this stage to keep the performer enthusiastic however with little negative so they know what area to work on in the future. The second stage is the associative phase where the learner will continue to practise the skill after feedback from the cognitive phase. The learner will use intrinsic feedback to know how they could keep practising however the extrinsic feedback from the person guiding them will verbal and mostly negative. This will help the learner know exactly where and how to improve to get the best out of the performance. The final stage is the autonomous phase, which is what elite performers are at. ...read more.

There are many different types of feedback which are used in football just as much as any other sport. The three main types used by an extrinsic form are negative feedback, postive feedback and concurrent feedback. When negative feedback is used perhaps at half time or at the end it slightly demotivate me but makes me want to make amends on my performance. Positive feedback makes me motivated even more and continue to maintain the performance. The concurrent feedback which is given throughout the game gives me motivation during the game if I am performing not as well as I could. By rewarding the player they can remember the skill action they used to complete the skill and this will go into the long-term memory and used later in the game and be performed at a higher level. While negative feedback will develop a fear of failure and create a tense practise atmosphere. I have found from my research that feedback has a high importance of involvement in the learning of skill. Beginners need a lot of positive feedback from an outside source. The further the stage the performer is at the less extrinsic feedback is needed as they can feel themself when a skill is performed correctly or needs improving. ...read more.