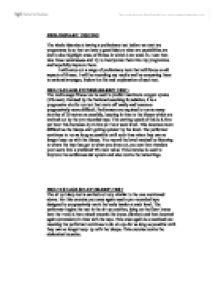 The whole idea about having a preliminary test before we start are programme is so that we have a good idea on what are capabilities are and to also highlight areas of fitness in which I am week in.

PRELIMINARY TESTING The whole idea about having a preliminary test before we start are programme is so that we have a good idea on what are capabilities are and to also highlight areas of fitness in which I am week in. I can then take those weaknesses and try to incorporate them into my programme and hopefully improve them. I will carry out a range of preliminary tests that will focus on all aspects of fitness. I will be recording my results and be comparing them to national averages. Below is a list and explanation of each test. MULTI-STAGE FITNESS (BLEEP) TEST: The multi-stage fitness test is used to predict maximum oxygen uptake (V02 max). Devised by the National coaching foundation, it is a progressive shuttle run test that starts off easily and becomes progressively more difficult. Performers are required to run as many shuttles of 20 metres as possible, keeping in time to the bleeps which are emitted out by the pre-recorded tape. ...read more.

This once again is a maximal test meaning the performer continues to do sit-ups for as long as possible until they can no longer keep up with the bleeps. This exercise works the abdominal muscles. STANDING LONG (BROAD) JUMP TEST This test is very easy to carry out. You start with your feet slightly apart on a mark, using a two-footed take off, see how far you can jump forward. The jump is marked from the take off to the closest mark left after the jump. The exercise is all about leg power the gastrocnemius in particular. VERTICAL JUMP TEST This exercise is set up by the performer standing against a wall and reaches up as far as possible, that measurement is then recorded. After that the performer takes a step back from the wall and then propels himself upward and with a piece of blue-tack in between his/her fingers sticks it as far up the wall as they can get it. ...read more.

The test is carried out for both the dominant, and less dominant hand. BODY FAT MEASUREMENTS The only equipment needed for this test is a pair of skin fold callipers. Fat is tested in four different sites of the body. The performer squeezes all of his/her fat at the particular site, and the tester clamps it in the callipers, and reads the measurements given in millimetres. The sites that are tested are the triceps, with the arm resting comfortably at the side, mid way between the elbow and the shoulder. The sub scapula, which is the diagonal fold across the back, just below the shoulder blades. The biceps which is at the same site as the triceps, only on the front of the arm. Finally, the suprailac, which is the natural line of iliac crest, just above the hipbone. 30 METRE SPRINT TEST This test is simple. The performer sprints over a distance of 30 metres, after a rolling start. A tester times the performer, from the time that he/she crosses the start line, until the time he/she crosses the finish line. ...read more.