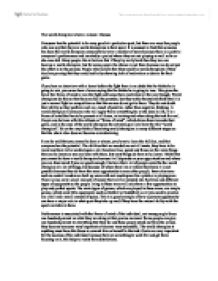 The world champion is born a winner. Discuss

The world champion is born a winner. Discuss Everyone has the potential to be very good at a particular sport, but there are very few people who can say that they are world champions in their sport. It is unusual to find that someone has been the world champion consecutively over a number of years because there is a peak to everyone's performance and inevitably a period where they are not playing as well as he or she once did. Many people like to believe that if they try really hard then they too can become a world champion, but for some people the chance is not there because we do not put the effort in to the process. People who believe that they could be world champions if they tried are proving that they could not be by showing lack of motivation or desire for their goals. If you hear an interview with a boxer before the fight there is no doubt that he thinks he is going to win, you never hear a boxer saying that he thinks he is going to lose. ...read more.

The abilities that are needed are not all innate, they have to be learnt and have to be worked upon a lot. Reaction time, speed and focus are the main things that can be innate so you are born with them, but most things do have to be learnt. I think that you cannot be born a world champion because it all depends on your opportunities and where you are discovered if you are good enough. I believe that a lot of people could be the world champion at a lot of things, but because of where they live or whom they know it is not possible because they do have the same opportunity as man other people. Inner city areas such as central London are built up areas with not much space for a pitch or a playing area. There is also only a small amount of money that will be invested into facilities and different types of equipment so the people living in these areas will only have a few opportunities to play and perfect sports. ...read more.

There are however different ways of focusing the mind which can be taught, for example Cassius Clay was taught a different way to fight when he first started training with a man by the name of Fred Stoner. Cassius Clay aka Muhammad Ali had the will power and the positive mental attitude to perform his world title fights. He was born a winner because he always had the power in his mind as well as his fists in everything that he did. He believed very strongly about r****m and refused to fight in the Vietnam War because of his strong beliefs in the Muslim religion. He was a conscientious objector and was campaigned against by many sources such as the newspapers. This shows that he has an attitude, which will not be beaten and shows that his will to win was so strong that it powered him to his goal. "At the tender age of 22 Ali knew that he was something above and beyond a great boxer: He had marketing sense, political finesse, and a feeling of noble purpose." This extract is from a biography written by B. Kimberly Taylor about the life and career of Cassius Clay. ...read more.