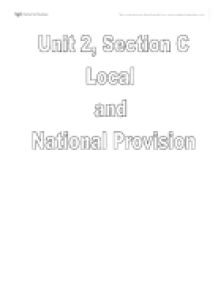 There are 43 county football association and they are the backbone of grassroots football throughout the country. The counties are independent bodies, affiliated to The FA, but responsible for running

Introduction It is estimated that around 70 thousand boys play football, for either a school or club team, at each age level between the age ranges of Under 11 to Under 16, and that over 500 thousand play between the ages of nine to 16. Therefore, there should be a lot of English players playing in the English Premier League, coming up the ranks through academies. But this is not the case as you will clearly see when watching the premiership and hearing some of the critism clubs like Arsenal get for having too many foreign players. I personally feel that a lot of these English players in the academies get dropped at around the Age of 16 or when they are ready to take that step up into the reserves or first team. This is probably due to the growing number of foreigners playing in the premiership. 25 man squads will be limited to 17 foreigners by 2008-2009. This is for the UEFA Cup and Champions League (UEFA Ruling) which will make clubs oblige the law as if the want to be playing European football and be a big club they will need to do this. ...read more.

The Hunts FA have a county team for Under 14, 15 and 16. I played for all of them and enjoyed it as it was a step up from normal Sunday football. The Hunts FA also has a cup called the Hunts Cup which is for teams that only are part of Huntingdonshire. There is no lack of referees, facilities and competitions in this area which is can only have a positive effect on players games. As proven by Darren Bent who grew up in Huntingdon. Provision for male/female competitors In this area there are a number of clubs for males and females. Noticeably there are more clubs in and out of school for boys as Football is predominantly played by males. The schools I attend have girls and boys football teams. We play other schools throughout the year. The girls teams in and out of school tend to be multi aged as otherwise they would not be able to get a team easily. Outside of schools for boys there are clubs for ages between 9 and 18, from 7-a-side through to 11-a-side, the length on games increase the older you get and by the time you reach under 18's you are playing the full 90 minutes like professionals. ...read more.

The development of players seems to be lets the provision down as not enough players get through to the academy systems as we need to build up the success of football internationally. This is probably due to the fact that a number of foreign players are being brought in by these professional clubs. There are however teams which show that young players can be brought through, like Manchester United (Beckham, Scholes, Neville G & P, etc), while others like Chelsea buy in their talent from abroad hoping for success. This method seems to be working for Chelsea at present. But this World Cup there is high hopes for England to win it as we have got our strongest team since 1966. As a country we need more English players to go through the ranks and play professional football in Premiership. This would strengthen the National team even more and will give more job opportunities for English players. With the help this new rule from UEFA, hopefully by 2010 there will be an increase in the number of English players in the Premiership. All of the other English leagues are fine at present. There are not really anymore problems with football in England at present. But one thing we may need to keep any eye on referees as there is starting to be a shortage of them due to the abuse they get. ...read more.