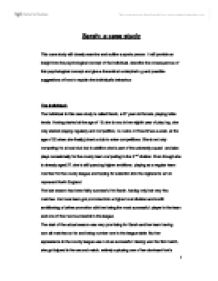 This case study will closely examine and outline a sports person.

Sarah: a case study This case study will closely examine and outline a sports person. It will provide an insight into the psychological concept of the individual, describe the consequences of this psychological concept and give a theoretical underpinning and possible suggestions of how to explain the individual's behaviour. The individual: The individual in this case study is called Sarah, a 27 year old female, playing table tennis. Having started at the age of 19, she is now in her eighth year of playing, she only started playing regularly and competitive, i.e. twice or three times a week, at the age of 22 when she finally joined a club to enter competitions. She is not only competing for a local club but in addition she is part of the university squad and also plays occasionally for the county team competing in the 2nd division. Even though she is already aged 27, she is still pursuing higher ambitions, playing as a regular team member for the county league and hoping for selection into the regional team to represent North England. The last season has been fairly successful for Sarah, having only lost very few matches. Her local team got promoted into a higher local division and is still ambitioning a further promotion with her being the most successful player in the team and one of the most successful in the league. ...read more.

According to c*x (1998), self-efficacy is a situation specific self confidence. Additionally, Gill (2000) states that it is also the belief or the perception that one is competent and can do whatever is necessary in a specific situation to perform a task successfully. The following diagram according to Gill (2000) and Weinberg & Gould (1995) will illustrate Bandura's theory: ? ? ==> ? ? Performance accomplishments, according to Gill (2000) as well as Weinberg & Gould (1995), are based on mastery experiences and provide therefore the most dependable information on self-efficacy. Vicarious experiences, stated be Weinberg & Gould (1995) include modelling and imagery. Seeing demonstrations and watching somebody else successfully accomplishing the skill will increase self-efficacy (Gill, 2000). The effect will be enhanced when similarity between model and individual is greatest (Weinberg & Gould, 1995). Verbal persuasion will also influence the individual's behaviour and represents verbal encouragement from the coach or fellow athletes like "You can do it", "You have done it well", as well as positive self talk like "I can do it". Most influential on the performance will be a trustworthy and credible source (Weinberg & Gould, 1995). Along with Gill (2000), the role of the forth source of efficacy is less clear, but Bandura suggests that the perceptions of arousal, respectively the physiological states, positively affect the performance through efficacy expectations. ...read more.

A causal relationship can not always be established as further factors might have affect the findings. And a case study is producing a lot of data as well as being very time consuming. But according to Eysenck (2000), the case study is an inductive way suggesting a hypothesis/theory where no model or theory existed. This new theory can then be tested under more controlled conditions with more participants (Eysenck, 2000). Hence, using Bandura's self-efficacy theory to build up an injured athlete's confidence might have been helpful in this particular case, but in general it can not be said that this theory is will build up injured athletes' self-confidence when applied. Depending on further factors, the application of , e.g., Weiner's attribution theory or the Achievement goal theory could lead to a similar, respectively same result, i.e. building up the self-efficacy of an injured athlete. Reference List: c*x, R.H. (1998) Sport Psychology - Concepts and applications. 4th ed. Boston. McGraw-Hill. EYSENCK, M.W. (2000) Psychology A student's handbook. East Sussex. Psychology Press. GILL, D.L. (2000) Psychological dynamics of sport and exercise. 2nd ed. Leeds. Human Kinetics. THOMAS, J.R. and NELSON, J.K. (2001) Research Methods in Physical Activity 4th ed. Leeds. Human Kinetics. WEINBERG, R.S. and GOULD, D. (1995) Foundations of Sport and Exercise Psychology. Leeds. Human Kinetics. 1 ...read more.