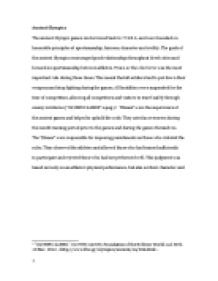 Threats to the Olympic Ideals

﻿Ancient Olympics The ancient Olympic games can be traced back to 776 B.C., and were founded on honorable principles of sportsmanship, fairness, character and civility. The goals of the ancient Olympics encouraged good relationships throughout Greek cities and focused on sportsmanship between athletes. Truce, or the ekecheiria was the most important rule during these times. This meant that all soldiers had to put down their weapons and stop fighting during the games. All hostilities were suspended for the time of competition, allowing all competitors and visitors to travel safely through enemy territories (?OLYMPIC GAMES? n.pag.).[1] ?Eleans? were the supervisors of the ancient games and helped to uphold the code. They acted as overseers during the month training period prior to the games and during the games themselves. The ?Eleans? were responsible for imposing punishments on those who violated the rules. They observed the athletes and allowed those who had trained sufficiently to participate and rejected those who had not performed well. This judgment was based not only on an athlete?s physical performance, but also on their character and moral status (?Ancient Olympic Games? n.pag.).[2] The Greeks valued a ?healthy mind in a healthy body?(?Olympic Athletic Ideal-Olympic Legacy.com? n.pag.). [3] An athletic victory was considered a credit to both the athlete?s physical and moral values. Strong disciplined character was just as important as a well-trained body. Cheating was strictly prohibited. If an athlete was caught cheating in any way he was fined, and the dues were used to build bronze statues of Zeus, the patron god of the Olympic games. The statues were placed along the tunnel leading up to the Olympic stadium. Each statue had an inscription that told the cautionary tale of the offense to remind athletes the importance of obeying the rules (?Cheating in the Ancient Olympic Games? n. pag.). ?Great financial gain and fame was the prize for victory?, causing many athletes push the rules in hopes of athletic achievement (Nowes n.pag).[4] The fist recorded cheating in Olympic history was 388 B.C., when a boxer named Eupolus bribed three opponents to purposely loose. ...read more.

Some Olympic events, such as the Hungarian defeat of the Soviet water polo team in 1956 took a large symbolism significance (Sterngass pg. 37). Drug Use by Other Countries Of course, the U.S.S.R. was not the only country to seek international recognition through Olympic success. Many other countries have defied the Olympic code by using performance-enhancing drugs as well. ?Sports became a propaganda tool and athletic success was closely tied to nationalism and patriotism? (Sterngass pg.37). [11] As medal counts became more important, the use of performance-enhancing drugs also became more prevalent. Steroids first threatened the Olympic ideals by countries seeking political superiority. Suspicion of steroid use began as early as 1968, but the drugs did not become common until the 1972 Olympic games (?Steroid Abuse in Sports-Steroid Abuse.com? n.pag.)[12] The East German?s joined in the use of performance-enhancing drugs early on as well. ?In 1968 East Germany?s chief medical officer submitted a report to the government recommending the total and collective administration of steroids to all East German athletes? (?Steroid Abuse in Sports- Steroid Abuse.com? n.pag.). In the twenty years preceding this recommendation, Eastern Germany dominated nearly every international sporting competition. The East German drug use was yet another effort to prove their own superiority over the West, just as the Soviets had done just a few years earlier. Many East-German athletes were told that they were taking vitamins, rather than steroids. So, not only was the East German government practicing the use of unfair drugs, but they were also lying to their own athletes and jeopardizing the long-term health of the individuals. Since then, as more drugs have been developed, drug tests and methods for testing have also expanded (Benagh n.pag.).[13] In recent years, many American athletes have been accused and have tested positively for drug use. This kind of cheating is highly unethical and defies the Olympic code of fair play and good sportsmanship. ...read more.