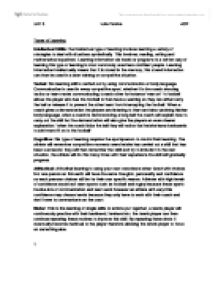 Types of Learning and how they apply to developing football skills.

Types of Learning Intellectual Skills: the intellectual type of learning involves learning a variety of strategies to deal with situations symbolically. This involves; reading, writing and mathematical equations. Learning information via books or programs is a written way of learning this type of learning is most commonly used less confident people. Learning information intellectually means that it is stored in the memory; this stored information can then be used in a later training or competitive situation. Verbal: this learning skill is carried out by using communication or body language. Communication is used in every competitive sport, whether it is the coach shouting tactics or team mates communicating to each other for instance 'man on! 'In football allows the player who has the football to then have a warning so they can either carry the ball or release it to prevent the other team from intercepting the football. When a coach gives a demonstration the players are listening to them and also watching his/her body language, when a coach is demonstrating a long ball the coach will explain how to carry out the skill but the demonstration will also give the players an even clearer explanation. 'when the coach kicks the ball they will notice that he/she leans backwards to add more lift on to the football' Cognitive: this type of learning requires the sportsperson to control their learning. ...read more.

they must bring the ball directly behind their head keeping both feet flat on the ground they must bring it right back over and release the ball. The coach will demonstrate this so the players can watch his/her body language getting a better understanding of the throwing technique. Participants will then carry out this activity throwing the ball to their partner who will then catch it and return it to them through a throwing. Stage 2. Associative The activity will be kept the same however athletes will be asked to take two steps back to make the distance they have to throw the ball longer, as a throwing isn't an easy technique participants will benefit by this continuous activity because the technique will gradually become habitual. Stage 3. Autonomous Participants will then be put into groups of four, the no.1s will act as defenders who have to try and prevent the ball being thrown over their heads, and no.2s will be attackers who are trying to throw the ball to each other, once the no.2's have complete five successful passes they will then swap over and no. 1s will become the attackers. The ball must land at the attacker's feet for it to be a successful pass. I choose this activity because it allows the participants to carry out this skill in a competitive environment. ?? ?? ?? ?? Unit: 5 Luke Devine AO2 1 ...read more.