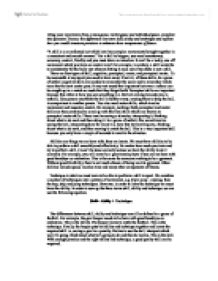 Using your experience from a team game, racket game and individual game, complete this question: Discuss the differences between skill, ability and technique and explain how you would structure practices to enhance these components of fitness.

Using your experience from a team game, racket game and individual game, complete this question: Discuss the differences between skill, ability and technique and explain how you would structure practices to enhance these components of fitness. "A skill is a co-ordinated act which involves complex movements brought together in a consistent and smooth manner." For a skill to happen, you need consistency, accuracy, control, fluidity and you must show an intention. It can't be a lucky, one off movement which you have no control over! For example, in archery, a skill would be to consistently hit the bulls-eye whereas hitting it once out of ten shots is not a skill. There are four types of skill; cognitive, perceptual, motor, and perceptual motor. To be successful at any sport you need to have most, if not all, of these skills. In a game of netball cognitive skills are needed to remember the score and to remember which team has the next centre pass. It may not sound that important but even a referee can be caught up in a match so much that they forget both! Perceptual skills are important because this refers to how you see something (i.e. ...read more.

For example, the goal keeper needs to be born with good hand/eye co-ordination. This is the ability. The keeper learns to catch the football. This is the technique. Finally, the keeper puts his ability and technique together and learns the required skill i.e. saving a goal in a penalty. He has to see the ball, interpret which way it's going, think about what he's going to do and then he moves. This is the skill. With enough practice and the right ability and technique, a good quality skill can be acquired. During any practice, you need to use the SPORT principles of training. They are specificity, progression, overload, reversibility and tedium. To enhance a backhand swing (skill) in badminton, you must specify training around this. I would first start off with a warm up. For the pulse raiser, I would make the badminton player do a gentle jog around the gym for about 3 minutes. I would then do some stretches from head to foot, concentrating a bit more on the arms. After that, I would set up a mini activity using different shots in badminton. The warm up now complete, I would start up a game of badminton and concentrate on hitting the shuttle c**k at the opponent's weakest side, making them use the backhand swing. ...read more.

For the cool down, I would use the same one as above; a jog and stretching. To improve a technique in football, i.e. a short pass, I would do a gentle pulse raiser; use static stretching to warm all muscles and then set up an obstacle course so that running can begin to improve. I would pair two people up and begin practising static short passes. Once they've got the hang of this I'd get one of them to run and receive the ball. Then I would get them to both run whilst passing the ball with the inside and outside of there foot. This is also improving perceptual motor skills and I am gently overloading the body as the tasks get harder. Finally I would involve the technique in a full game of football. Reversibility can be avoided by the player's flexibility being worked on outside of training. Many techniques in football involve good flexibility so to become a good player you need fine flexibility. Doing gymnastics in the players spare time is a great way to improve this. Boredom can be avoided by working on other techniques whilst having a break from that one (i.e. one week working on short passes, another week working on dribbling, the next week going back to short passes). ...read more.