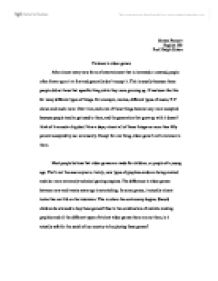 After almost every new form of entertainment that is invented or created, people often frown upon it at first and generally don’t accept it. This is usually because those people did not have that specific thing while they were growing up. It has been like this for many different types of things. For example, movies, different types of music, T.V shows and much more. Over time, each one of those things became way more accepted because people tend to get used to them, and the generation that grew up with it doesn’t think of it as such a big deal. Now a days, almost all of those things are more then fifty percent accepted by our community. Except for one thing, video game’s with violence in them.

Most people believe that video games are made for children, or people of a young age. That’s not the case anymore. Lately, new types of graphics cards are being created and also more extremely technical gaming engines. The difference in video games between now and twenty years ago is astonishing. In some games, it actually almost looks like real life on the television. This is where the controversy begins. Should children be allowed to buy these games? Due to the combination of realistic looking graphics and all the different types of violent video games there are out there, is it actually safe for the youth of our country to be playing these games?

Just like every other controversial topic in the world, this one also has two sides to it. One side wants to prove that, playing these games have no connections to real life behavior. They see no links connecting the violence inside the games to violence in real life. On the other side, there are millions of people who think that the number one reason of adolescent violence is connected to video games in one way or another.

Millions of kids and adults that play violent video games actually say that it helps them in real life. They see it as a way of releasing there anger out without actually hurting anyone or anything. Instead of physically damaging something in the real world, they are taking out there frustration inside the world of the video game. Other people believe that kids should not be able to even watch it let alone play it, because of all of the blood and adult typed themes in it. This is because older people have more of a grasp on the difference between what is reality and fantasy.

There are a lot more people against violent video games then there is for them. They believe that those games should be banned and completely off the market. A few years ago the government made it so on the cover of every video game, there would be a rating level for what age is “recommended” to even play it. But, there is no actual age limit required to buy them, which is the main concern of parents and other people on that side.

Overall this argument could go both ways. But in my opinion I think that games should be available to all ages of all different kinds of people. Since there is no scientific evidence that violence in video games actually affects the children’s behavior outside of the game, I think people should stop complaining and let it go just like they did with movies, T.V shows, and everything else that has been worldly accepted.