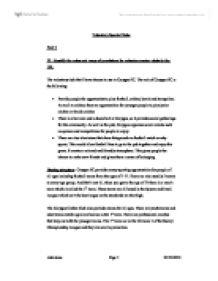 Voluntary Sports Clubs Part 1 P1- Identify the roles and range of provisions for voluntary sector clubs in the UK. The voluntary club that I have chosen to use is Croygas FC. The role of Croygas FC is the following: * Provide people the opportunity to play football, cricket, bowls and trampoline. As well as cricket, they are opportunities for younger people to play junior cricket or Kwick cricket. * There is a bar area and a dance hall at Croygas, so it provides social gatherings for the community. As well as the pub, Croygas organises social events such as quizzes and competitions for people to enjoy. * There are also televisions that show things such as football match on sky sports. This would allow football fans to go to the pub together and enjoy the game. It creates a relaxed and friendly atmosphere. This gives people the chance to make new friends and gives them a sense of belonging. Playing structure- Croygas FC provides many sporting opportunities for people of all ages including football teams from the ages of 7-17. There are also usually 2 teams to every age group. And that's not all, when you get to the age of 17 there is a men's team which is called the 1st team. These teams are all based in the Epsom and Ewell League which isn't the best league so the standards are that high. The Croygas Cricket Club also provides teams for all ages. There are youth teams and adult teams which again are known as the 1st team. There are professional coaches that help out with the younger teams. The 1st team are in the Division 5 of the Surrey Championship League and they are near to promotion. Facilities- The facilities at Croygas FC are average. The club house includes a bar area with seating and a wide screen television which show live football matches. ...read more.

When I was a member at the club, because the pitches at Croygas aren't not a good standard we had to hire pitches else where. Also we had to rent out the training facilities, pitches, buy corner flags and linesmen flags, and goal nets, kit and tracksuits. Match fees- People that play in the team matches have to pay a match fees, this is usually �5-�10 depending on the importance of the match or the club. The club will make a lot of money through this because they might have a lot of teams in the club like cricket teams, football teams etc and these teams are usually about a 15 man squad. Grants from governing body such as F.A. will give money to these voluntary sports clubs in order to help the clubs with the funding. Because the government believes in giving opportunity to these clubs, they want to help them create the right conditions for people to use and enjoy using the clubs so the government is giving there full trust to these clubs to use the money wisely. The clubs will get sponsorship deals and the sponsorship companies in return will get advertisement from these clubs. Also lottery funding will help a club with major projects such as flood lighting on pitches, refurbish changing rooms etc. Also clubs set up fund raising events to help the club to raise money e.g. race nights, dinner dance, BBQs, quiz nights, fete, and club days such as 5-a-side football tournaments. These are to help out for projects that the club wants to do. The government gives money to these voluntary sports clubs e.g. loans, grants. A club might decide to take out a loan from the government in order to cover for the costs of running the club, buying all the equipment, keeping the place neat and tidy etc. the club however will have to pay the government back and they can do this by paying it monthly or annually. ...read more.

Croygas is obviously financially successful because the club has recently refurbished the changing rooms and bar area. The club now looks smarter and cleaner it obviously a project like that would've cost the club quite a lot of money. The club relied on many resources of finances including money from donations given by parents which was �2000. This helped a lot and the donations were an effective way of making money, and it shows that the parents were willing to help out to improve their club for their child to use. As well as the donations, the club set up fund raising events such as the quiz nights and fun days where the club managed to receive �300. The club charges �12 a ticket to the quiz event and about 150 people turned up to this dinner and dance quiz night. As well as the money from the tickets, the bar area would be able to raise at least �200 from the people wanting to buy drinks and snacks. Other events such as Saturday Night Dance Fever would raise money from people wanting to go to the event, there are BBQ days during the summer that appeal to many of the parents because they can chill out with all the other parents and enjoy themselves in the lovely weather. The club would again raise about �300 through tickets being sold for parents etc. Another good fun raising event is the Fantasy Football League, where every summer there would be a 5-a-side tournament where teams can enter a team but they have to pay and entry fee to play. The competition and the chance of winning a prize appeals to many people and the club raises a lot of money through this aswell. When I was playing for Croyags, we had to pay a yearly membership fee that would enable each player to get registered and be allowed to play. We had to pay �120 each season and the club would therefore raise about �3000-�4000 because there are many different football teams at the club. ?? ?? ?? ?? Josh stone Page 1 05/12/2010 ...read more.