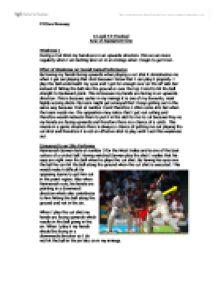 A Level P.E Practical Area of Assessment One Weakness 1 During a Cut Shot my hands are in an upwards direction. This occurs more regularly when I am batting later on in an innings when I begin to get tired. Effect of Weakness on Overall Game/Performance By having my hands facing upwards when playing a cut shot it demotivates me when I get out playing that shot because I know that I can play it properly. I play the ball underneath my eyes and I get far enough over on the off side but instead of hitting the ball into the ground or over the top I tend to hit the ball straight to backward point. This is because my hands are facing in an upwards direction. This is because earlier in my innings it is one of my favourite, most highly scoring shots. My team might get annoyed that I keep getting out in the same way because I bat at number 3 and therefore I often come into bat when the team needs me. The opposition may notice that I get out cutting and therefore would motivate them to put it in the slot for me to cut because they no my hands are facing upwards and therefore there is a chance of a catch. This means in a game situation there is always a chance of getting me out playing the cut shot and therefore it is not an effective shot to play until I sort this weakness out. Compared to an Elite Performer Ramnaresh Sarwan bats at number 3 for the West Indies and is one of the best cutters of a cricket ball. Having watched Sarwan play the shot I realise that his eyes are right over the ball when he plays the cut shot. By having his eyes over the ball he can hit the ball along the ground when the cut shot is executed. ...read more.

Also they may bring a spinner on because with this flaw in my technique it is much harder to keep the ball down with an open bat face. I may get psychologically frustrated with this flaw in my technique and this may cause me to try and play other shots to spinners such as sweeps or I may advance down the wicket, increasing the chance of being out. I would do this because I know that my forward defence is weak so I would try and do something different so I do not have to play it that often. My team may get de-motivated is if I keep getting out in the same way- caught by close fielders. This may also put pressure on them to get runs. Compared to an Elite Performer Having watched Ricky Ponting play a forward defence I now realise what I am doing wrong with my front elbow. Ricky's elbow is much more bent than mine and also his bat face is facing down so the ball would naturally go down to the floor eradicating the chance of a catch. We can see from the red arrow how bent his front arm is, mine would be a lot straighter and therefore naturally the bat face would be facing in an upwards direction. With a solid forward defence the opposition team will think to themselves that I can bat. The forward defence is a fundamental in the game of cricket and Ricky Ponting, having this in his armoury can and will continue to be one of the best batsmen ever. Cause of Weakness Lack of flexibility at the elbow joint- My front elbow sometimes is very stiff which is why I cannot extend my elbow during a forward defensive. A Lack of flexibility can be caused by many things. * Not Warming up- Warming up is a vital piece of modern day sport. ...read more.

Effect Of Weakness On Overall Game/Performance If I do not try and get a boundary early on in the over then there can be pressure on me to get boundaries later on in the over. If I already have a boundary then I can relax and just take the singles to get 6/7 runs per over easily. This can create pressure on my other batting partner because it means he will have to change the way he plays to get more runs because I am not getting as many. For the opposing team, they can set their field attackingly for the start of the over and defensively for the end of the over if they think that I am not looking to hit a boundary early on in the over. Compared to an Elite Performer Kevin Pietersen bats number 4 for England. Having watched Pietersen bat I can see that he makes an early decision to relieve pressure by looking to hit a boundary at the start of an over. He talks to his other batting partner and lets them know what they are doing so there is a clear plan of each of their roles. Pietersen adjusts if there is a good ball and will defend it if he cannot score off it. Once I've made a decision I am going to try and get a boundary I don't adapt to the ball in the way that I should. Pietersen always tries to hit the ball into a gap when he is attacking, so that if he messes the shot up there is a higher chance that he won't get out from it. Cause of Weakness Poor Decision Making- I make the wrong decision when to attack a ball and when to defend it Corrections of Weakness To improve my decision making skills I would have to; * Improve my selective attention by, practicing with distractions, and my using the correct practice. * Expose various schema in as many different parameters as I can * Use the relevant practice ?? ?? ?? ?? P.E Sam Hennessy ...read more.