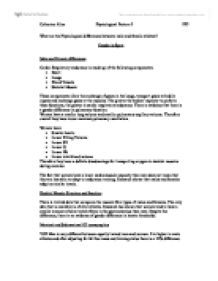 What are the Physiological differences between male and female athletes

What are the Physiological differences between male and female athletes? Gender in Sport Male and Female differences Cardio-Respiratory endurance is made up of the following components: * Heart * Lungs * Blood Vessels * Skeletal Muscle These components allow the exchange of gases in the lungs, transport gases to bodily organs and exchange gases at the muscles. The greater the bodies' capacity to perform these functions, the greater is cardio respiratory endurance. There is evidence that there is a gender difference in pulmonary function. Women have a smaller lung volume and smaller pulmonary capillary volume. Therefore overall they have lower maximal pulmonary ventilation. Women have: * Smaller hearts * Lower Filling Volume * Lower SV * Lower Q * Lower Hb * Lower total blood volume Therefore they have a definite disadvantage for transporting oxygen to skeletal muscles during exercise. The fact that women have a lower cardiovascular capacity than men does not mean that they are less able to adapt to endurance training. Research shows that males and females adapt on similar levels. Skeletal Muscle Structure and function There is limited data that compares the muscle fibre types of males and females. The only data that is available is of elite athletes. Research has shown that women tend to have a smaller amount of slow twitch fibers in the gastrocnemius than men. Despite the difference, there is no evidence of gender difference in lactate thresholds. Maximal and Submaximal O2 consumption VO2 Max is very different between equally trained men and women. It is higher in male athletes and after adjusting for fat free mass and training status there is a 15% difference. In real terms, in a 10,000 meters race this amounts to a time difference of 4 Minutes and 42 Seconds, OR A 13% performance advantage for men. ...read more.

Special Concerns for Women who exercise There is a sub group of women that have exercised who have reported a shortening in their menstrual cycle. The more intense the training, the more the cycle is shortened. If a female trains to hard the cycle can disappear. This is known as athletic amenorrhea. There are two types of amenorrhea, these are; * Primary- is where menstruation has not started by age 16 * Secondary- is when the female has begun menstruation, but her periods then stop How does it occur? Intense exercise and extreme thinness may reduce the levels of hormones that regulate a woman's periods. These hormones, estrogen and progesterone, are important for overall body health. Estrogen is especially vital for healthy bones. Athletic amenorrhea is often seen in sports that stress thinness, such as gymnastics, figure skating, and long-distance running. When thinness is heavily emphasized, some young women may develop eating disorders such as anorexia or bulimia. A person with anorexia diets to excess, sometimes to the point of starving. People with bulimia binge (eat a lot at one time) and then purge, either by vomiting, using laxatives, or exercising too much. http://www. answers.yahoo.com/question/index?qid=20080407040503AAT4QXZ - 32k Long term consequences * Infertility - a woman is unable to conceive whilst she is amenorrhoeic, but athletic amenorrhoea has no effect on long term fertility once menstruation recommences. * High blood cholesterol levels - caused by an oestrogen related slump in the ratio of 'good' cholesterol (high density lipoprotein or HDL) to 'bad' cholesterol (low density lipoprotein or LDL). * Osteoporosis - a disease characterized by brittle, honeycombed bones that break easily. * Premature ageing - loss of skin elasticity due to insufficient levels of oestrogen. ...read more.

The Kalejin (1.5m population) athletes have more than 70% of Kenya's Olympic medals for running. Kenyan's have a distinct body type: * Ectomorphs * Short and slender * Higher RBC count * Huge lung capacity * High percent of slow twitch muscle fibers * More energy producing enzymes in their muscles They are the perfect biomechanical package for running Caucasian Athletes Caucasian athletes tend to have, on average, more natural upper-body strength, predictably dominated weightlifting, wrestling and field events, such as the hammer (hold 46 of the top 50 performances). Evolutionary forces have shaped a population with a predilection toward a mesomorphic body type - large and muscular, particularly in the upper body, with relatively short arms and legs and thick torsos. These proportions tend to be an advantage in sports in which strength rather than speed is at a premium. Caucasian athletes tend to dominate swimming events; very few athletes reach any swimming finals. This is due to that African athletes have heavier skeletons and smaller chest cavities. This would lead them to a disadvantage when competing in the water. Indian Athletes Indian Athletes excel in a variety of sports particularly cricket. This is due to social and cultural influences rather then physiological differences. Research has shown that genetic evolution has strongly influenced the physiological make up of people living in different environments. This could determine if an individual has the chance at becoming an elite athlete. Through dedication, commitment and good fortune are also factors that play a major part in determining if an athlete will be a winner. It is also necessary to take in to account the social, cultural and economic factors of a country. These can have a great effect of choice of sport. This could help to explain why some races excel at some sports but not in others. ...read more.