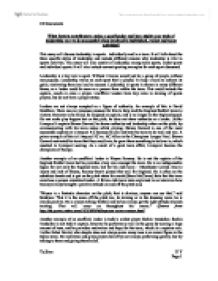 What factors contribute to make a good leader and how might your style of leadership vary to be successful when involved in individual, racket and team activities?

What factors contribute to make a good leader and how might your style of leadership vary to be successful when involved in individual, racket and team activities? This essay will discuss leadership in sports - individually and in a team. It will talk about the three specific styles of leadership and include different reasons why leadership is vital in sports activities. The essay will also consist of leadership among team sports, racket sports and individual sports. It will also include current sporting examples for each sport discussed. Leadership is a key role in sport. Without it teams would just be a group of people without any purpose. Leadership varies on each sport that is played. To help a team to achieve its goals, motivating them can lead to success. Leadership in sports is shown in many different forms; as a leader could be seen as a person from within the team. This could include the captain, coach or even a player. Unofficial leaders have key roles in training of sports players, but do not have a proper status. Leaders are not always accepted as a figure of authority. An example of this is David Beckham. There was an immense pressure for him to help lead the England football team to victory. ...read more.

In order to be a personal orientated leader it is vital that he/she can fulfil these characteristics. Firstly, to be capable in controlling people and events, this would include co-coordinating tactics and motivational strategies.Secondly, in order to become a good leader, a clear relationship between the individuals and the leader needs to be established and this idea of respect needs to be obtained in order for the leader to co-ordinate team efforts. Thirdly, a person orientated leader has to be quick in identifying problems and solutions, providing the team with the agenda and clarifying objectives. Communication between the leader and team is essential, although these leaders should not dominate in discussions allowing the team to participate as often and confidently as they can. An optimistic leader is proved to have a positive impact on the team. Another example of a person orientated leader is a football manager. Football managers have to be extremely good at recognizing potential within the team. They also have to be quick at identifying problems e.g. maybe the defence is all over the place and the strikers are sitting back to much. Managers in football that are very good person orientated leaders are people such as Martin O'Neal, Alex Ferguson and Rafael Benitez. The approach adopted by a leader varies with both the individual and the situation. ...read more.

(Source from http://www.msnbc.msn.com/id/5239122/) In the year 2000, when he was 24 years old, he won four major golf tournaments; the U.S. Open, U.S. Amateur, the British Open, and the British Amateur. In racket sports such as tennis, the leadership technique is different compared to team sports. Roger Federer is a very successful tennis player because of his leadership qualities. Sports such as tennis have a greater demand of mental preparation than others. Tennis is a game of many situations. It makes a player more aware of such techniques they need to master, such as the backhand. In order to master it they have to face a receiving ball on their backhand and learn to adjust to it. Federer has won the Grand Slam men's singles nine times, and won Wimbledon three times. Dedication can payoff and lead to great things. In conclusion, leadership in every single sporting activity is essential and important. As a team motivation is required, belief, someone to excel you further, and who better than a great team leader who has the ability to do all those things. Even as an individual, to go out and win a game you need mental motivation, someone to push you further. Overall, without leadership, a team or an individual would find it extremely hard to go out and win something. ?? ?? ?? ?? P.E Coursework Tej Soor 12 Y Page 1 ...read more.