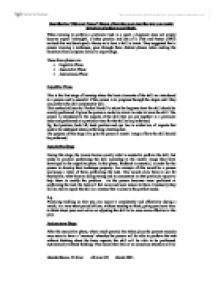 When learning to perform a particular task in a sport, a beginner does not simply become expert 'overnight', it takes practice and lots of it. Fitts and Posner (1967) realised this and developed a theory as to how a skill is learnt.

When learning to perform a particular task in a sport, a beginner does not simply become expert 'overnight', it takes practice and lots of it. Fitts and Posner (1967) realised this and developed a theory as to how a skill is learnt. They suggested that a person learning a technique, goes through three distinct phases when making the transition from complete novice to expert stage. These three phases are: * Cognitive Phase * Associative Phase * Autonomous Phase Cognitive Phase This is the first stage of learning where the basic elements of the skill are introduced to a person and is essential if the person is to progress through the stages until they can perform the skill consistently well. This method utilises the 'Perfect Model' to show the beginner how the skill should be exactly performed. ...read more.

Associative Stage During this stage, the learner knows exactly what is needed to perform the skill, but needs to practice performing the skill according to the mental image they have developed in the cognitive phase. In this phase, feedback is essential, in order for the person to develop their technique properly. An example of this would be a person analysing a video of them performing the task. This would allow them to see for themselves, what they are doing wrong and to concentrate on that particular aspect to help them to rectify the problem. As the person becomes more proficient at performing the task, the task will feel more and more natural to them. Eventually they will be able to repeat the skill in a manner that is close to the perfect model. ...read more.

This means that little or no conscious attention will be paid with regards to the skill in question. Leaving the player free to think about other considerations, regarding opposition and individual tactics. Eg1 A person sees a ball coming quickly towards them, and instead of moving out of the way, they catch the ball without thinking about what they are doing. Eg2 In tennis, where a person can perform a serve without thinking, leaving themselves free to think about their next move, or what their opponent will do. I will attempt to associate these stages of learning to the skill of performing a kick for touch in rugby. Describe the 'Fitts and Posner' Stages of learning and describe how you would structure practices accordingly. Monish Shome 12 River AS level PE March 2003 ...read more.