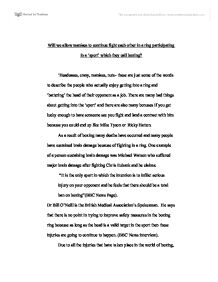 Will we allow maniacs to continue fight each other in a ring participating in a &amp;#145;sport&amp;#146; which they call boxing?

Will we allow maniacs to continue fight each other in a ring participating in a 'sport' which they call boxing? 'Headcases, crazy, maniacs, nuts- these are just some of the words to describe the people who actually enjoy getting into a ring and 'battering' the head of their opponent as a job. There are many bad things about getting into the 'sport' and there are also many bonuses if you get lucky enough to have someone see you fight and land a contract with him because you could end up like Mike Tyson or Ricky Hatton. As a result of boxing many deaths have occurred and many people have sustained brain damage because of fighting in a ring. ...read more.

So far, there has been a number of safety measures introduced to the world of boxing, but none have proven, in the past 10 to 20 years, to help significantly against brain damage and other serious effects such as eye and ear injuries e.g. Mike Tyson biting Evander Holyfield's earlobe. These attacks continue to occur because, although safety measures such as Head Gear must be worn at all times during an Amateur Fight, guidelines like these are not imposed in any of the Professional Fights. The Journal of Medical Ethics, which is published by the BMA, had an article in March by Dr. Nigel Warburton. He said that the BMA's policy against Boxing is "inconsistent, paternalistic and too weak to justify a change to Criminal law". ...read more.

This argument could be argued from all different angles and ways. to say boxing is bad influence on children is a very acceptable argument and to say boxing brings pleasure to millions of people is very acceptable aswell, but, in my view there is nothing wrong with boxing because not too many serious injuries are caused by boxing and those who they do happen to maybe shouldn't have been in a boxing ring in the first place or it was just the luck of the draw that it happened to them. I say this because I am a fan of boxing but I think I have backed up my views to inform the reader that I am writing this essay in a neutral state. ...read more.