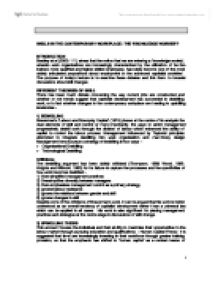 SKILLS IN THE CONTEMPORARY WORKPLACE: THE 'KNOWLEDGE WORKER'? INTRODUCTION Bradley et al (2000: 111) stress that the notion that we are entering a 'knowledge society', wherein work organizations are increasingly characterized by the utilization of better-trained, more qualified and higher skilled employees, has lately become one of the most widely articulated propositions about employment in the advanced capitalist societies'. The purpose of today's lecture is to examine these debates and link them to broader discussions about skill changes. DIFFERENT THEORIES OF SKILL There has been much debate concerning the way current jobs are constructed and whether or not trends suggest that capitalist development has succeeded in deskilling work, or in fact whether changes in the contemporary workplace are leading to upskilling tendencies:- 1) DESKILLING Braverman's 'Labour and Monopoly Capital' (1974) places at the centre of its analysis the dual elements of skill and control or more importantly, the ways in which management progressively deskill work through the division of labour which enhanced the ability of capital to control the labour process. Management influenced by Taylorist principles attempted to integrate deskilling into work organisation and machinery design. Management hence pursue a strategy of deskilling in two ways:- * Organisational Deskilling * Technological Deskilling Criticisms The deskilling argument has been widely criticised (Thompson, 1989; Wood, 1982; Knights and Willmott, 1990) for its failure to capture the processes and the specificities of how work becomes deskilled:- 1) Over-simplified management practices 2) Oversimplifies diversity between managers 3) Over-emphasises management control as a primary strategy. 4) Ignored labour resistance 5) Ignores the relations between gender and skill 6) Ignores changes in skill Despite some of the criticisms of Braverman's work, it can be argued that his work is better understood as an overall tendency of capitalist development rather than a universal law which can be applied in all cases. His work is also significant for placing management practices and strategies at the centre stage in discussions of skill change. ...read more.

The focus of these debates centres upon evidence that the following factors are stimulating the rise of knowledge workers:- * Growth of the service sector * Restructuring of work * New technology and skills a) Growth of the service sector The growth in the service sector is seen to be a key source of the trend towards upskilling as these occupations are believed to involve the acquisition, processing, and utilization of 'knowledge'. Industrial society was typified by the presence of repetitive and unskilled manual tasks carried out to rigid specifications in a Taylorist manner, the emerging 'post-industrial society' based upon the service sector and the deployment of new technology was characterized by the importance of knowledge work. In this respect, the post-industrial society requires more highly skilled workers. * Evidence? - Critical commentators question the simple relationship between the service sector and knowledge workers e.g. Thompson and Warhurst (1998), Ritzer (1998) * How much knowledge is utilised? - Critics question the extent of knowledge used in service sector work e.g. Baldry et al's (1998) case study of white-collar work in the financial service sector. b) Restructuring of work It is argued that the restructuring of work requires more highly skilled workers (Womack et al 1990: 101-102). The restructuring of work in manufacturing has led to a smaller number of multi-skilled, polyvalent and flexible employees. For some protaganists the development of techniques based on flexible specialisation and lean production provide the opportunity for upskilling. * Evidence of multi-skilling? - Bradley et al (2000) argue that changes in work organization have resulted in a general trend of upskilling is highly questionable. * Lean production as a hybrid of Taylorism - Many researchers argue that Taylorist principles of job design continue to predominate, researchers such as Berggren (1993) argue that lean production is hybrid of Taylorism whereas, Parker and Slaughter (1988) view lean production as an intensification of Taylorism. ...read more.

Despite this, it is important to note that Tayloristic traditions continue to play a part in the contemporary workplace Which theory best helps us to make sense of these trends? COMPENSATORY THEORY Developed by Penn et al (1994) to overcome some of the problems with theories of upskilling and deskilling thesis. It argues that technological change generates both deskilling and upskilling. Penn notes that this can be observed in two ways :- 1. The effects are international - the shift in routine manufacturing from advanced, core economics to less developed peripheral economies. 2. The results differ between and within occupations - some gain more skills whilst others see their skills being reduced. So, direct productive workers see their work deskilled but ancillary workers such as maintenance technicians see their skills increase. This theory acknowledges that we should examine skill changes with reference to occupational groups, industries and national contexts. SUMMARY Examining skill changes is a complex undertaking that involves an evaluation of the context and the different actions of managers, unions and employees. For these reasons, broad statements regarding deskilling, upskilling or the rise of 'knowledge workers' can be problematic. Regarding knowledge workers - there are considerable problems with the definition of this term and disagreements over the evidence for these claims. For these reasons Bradley et al (2000) conclude, the elaboration of an economy characterised by 'knowledge work' is long way off. They stress that it is important to recognise that while some groups have benefited from changes in the information age relating to economic and technological advances, many others are becoming increasingly excluded from the advantages accruing to the privileged. For them, the skills revolution is, as yet, little more than a myth. READING Warhurst, C. and Thompson, P. (1998) 'Hands, Hearts and Minds: Changing Work and Workers at the End of the Century', in Thompson, P and Warhurst, C. (eds) (1998) Workplaces of the Future, Basingstoke: Macmillan. Bradley, H., Erickson, M., Stephenson, C., Williams, S. (2000) The Myths at Work, Chapter 6, Cambridge: Polity Press. Noon, M. and Blyton, P. (2002) Realities of Work, Chapter 6&8 Basingstoke: Palgrave. ...read more.