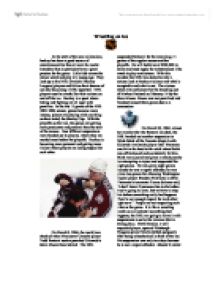 Wrestling on Ice At the start of the new millennium, hockey has been a good source of entertainment for fans all over the world. Canadian fans in particular have a great passion for the game. Little kids across the nation watch and play at a young age. They look up to the NHL (National Hockey Leageue) players and follow their dreams of one day becoming a NHL superstar. NHL players must be careful for their actions on and off the ice. Hockey is a sport where hitting and fighting are all legal with penalties. In the last 15 games of the NHL 2003-2004 season, games become more intense, players are playing with one thing on their mind, the Stanley Cup. ...read more.

With this incident the NHL has started to take a serious look at hockey violence and what is acceptable and what is not. The vicious attack was settlement for the knocking out of Markus Naslund on February 16 by the Steve Moore. Moore was not penalized and Naslund missed three games due to a concussion. On March 20, 2004, almost two weeks after the Bertuzzi incident, the NHL handed out another suspension to Wade Belak of the Toronto Maple Leafs. Colorado Avalanche player Ossi Vaananen was hit in the head with a stick when Belak was off-balanced and accidentally hit him. Belak was ejected and given a match penalty for attempting to injure and suspended for eight games. ...read more.