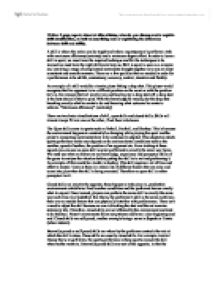 Write a 2 page report, aimed at elite athletes, wherein you discuss and/or explain skill classification, as well as describing and/ or explaining the difference between skill and ability.

Write a 2 page report, aimed at elite athletes, wherein you discuss and/or explain skill classification, as well as describing and/ or explaining the difference between skill and ability. A skill is where the action can be taught and where a sportsperson's performs a task with maximum efficiency (certainty) and a minimum degree effort. In order to learn a skill in sport, we must learn the required technique and for the techniques to be learned we must have the right abilities to help us. Skill in sport is seen as a complex act, involving a range of complicated movements brought together in to one or many consistent and smooth manners. There are a few qualities that are needed in order for a performance to be skilful, consistency, accuracy, control, intention and fluidity. An example of a skill would be a tennis player hitting a drop shot. This player would recognise that his opponent is in a difficult position on the court or with the position he's in, for example the ball may be low and hard to play a deep shot off, a drop shot is the best choice of shot to play. With this knowledge he would play the drop shot knocking exactly what he wants to do and knowing what outcome he wants to achieve. "Maximum efficiency". (certainty) There are two basic classifications of skill, open skills and closed skills. ...read more.

Externally paced skills are sort of the opposite, in that the environment or opponent has a large influence in the flow and rate of the skill being performed. The individual must pay attention to possible external events in order to control his/her rate of movement. These skills involve reaction, and are usually open skills. For example in ball games the individual must time his actions with the actions of other players as well as the ball. The types of skills which are needed in most sports consist of cognitive, perceptual, motor and perceptual motor. Cognitive Skills are often known as intellectual skills and involve the working of the mind. Perceptual Skills involve our ability to interpret the stimuli. Although we all see the same information as everyone else does, our brain interprets it differently. Motor Skills involve parts to our muscular system and relate to our movement and muscular ability to control. Examples would be walking or running as this involves a series of movements and muscular control to the body. Perceptual Motor Skills is absolutely essential to have when competing in a sport; this is as it involves a combinational mixture of thought, interpretation and movement. (Basically a mixture of motor and perceptual skills). It is very hard for a sports performer to compete well with only one and not the other. ...read more.

This is bad news for some of us who would like to get to the top of our sport yet don't have the natural ability to do so no matter how hard we try, we may never reach levels of superstardom, like the Marian Jones and Roger Federers of this world as not all of us have the same innate qualities. If you have good skill in football at dribbling, you will need to have certain abilities to do this skill, such as co-ordination (hand/foot) and balance as well as agility to change direction with the ball. You can be good at a certain sport, for example tennis, but you need good need good ability such as hand-eye co-ordination, agility and balance to play this sport even better. Certain skills may require different sets of abilities or they may use the same abilities put together in a different type of order. Abilities are not always necessarily linked or related; a person having high levels of trunk strength may not have high levels of explosive strength. If a person is good at hitting a tennis ball, there is no guaranteed assurance that they therefore must also be good at hitting a shuttle cock. No one is born with a package of superior abilities strong enough make for an overall athletic ability; we need to also develop the specific skills required. We learn to combine and use abilities in specific situations and for carrying out specific skills. ...read more.