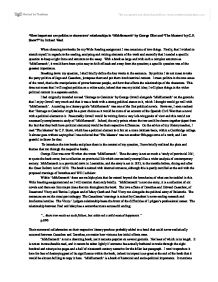 "How important are politics to characters' relationships in 'Middlemarch' by George Eliot and 'The Masters' by C.P. Snow?" by Richard Ward When choosing two books for my Wide Reading assignment I was conscious of two things. Firstly, that I wished to stretch myself in regards to the reading, analysing and writing elements of the work and secondly that I needed a specific question to keep a tight focus and structure to the essay. With a book as large and with such a complex structure as 'Middlemarch', it would have been quite easy to drift off-task and away from the question; a specific question was of the greatest importance. Breaking down my question, I shall briefly define the key words in the sentence. By politics I do not mean to take the party politics of Jago and Casaubon, juxtapose them and put them into historical context. I mean politics in the true sense of the word, that is the manipulation of power between people, and how that affects the relationships of the characters. This does not mean that I will neglect politics on a wider scale, indeed that was my initial idea; I will place things in the wider political context in a separate section. I had originally intended to read 'Homage to Catalonia' by George Orwell alongside 'Middlemarch' on the grounds that I enjoy Orwell very much and that it was a book with a strong political stance to it, which I thought would go well with 'Middlemarch'. According to a literary guide 'Middlemarch' was one of the first political novels. However, I soon realised that 'Homage to Catalonia' might be a poor choice as it would be more of an account of the Spanish Civil War than a novel with a political element to it. Presumably Orwell would be writing from a very left-wing point of view and this would not necessarily complement a study of 'Middlemarch'. ...read more.

There are occasions on which she does say what she thinks, but these are always intentional and hardly ever in error. When Casaubon dies, for example, great volumes of water have passed under the bridge of the Casaubon's marriage and it has not turned out to be at all happy. The codicil to his will, cancelling Dorothea's share of Casaubon's estate if she marries his cousin Ladislaw leaves Dorothea in a much different frame of mind to the optimistic and ever-loving Dorothea of the fifth chapter. " 'What I think, Dodo,' Celia went on, observing nothing more than that Dorothea was leaning back in her chair, and likely to be passive, 'is that Mr Casaubon was spiteful. I never did like him, and James never did... If he has been taken away, that is a mercy, and you ought to be grateful.' " p.533 Dorothea is quite passive here, and does not interrupt the announcement of the arrival of Lydgate with a crushing defense of her late husband. Celia is without doubt the best illustrator of discrepancy between thought and spoken opinions, whether in fault of her self or the positions she is placed in by Eliot. In 'The Masters', two themes stand out as examples of differences between spoken and thought opinions. Firstly, the death of Royce. As Royce is not initially told, it places the characters in the awkward position of having to visit him whilst giving the pretence that it is just a stomach ulcer and everything will be alright and back to normal before Christmas. When they learn of the situation some have no hesitation in telling Lady Muriel exactly they think, even if they know it is unmoderated and controversial. Joan, in the second chapter: " 'Then for God's sake don't go on with this farce.' The girl was torn with feeling, the cry welled out of her. 'Give him his dignity back.' ...read more.

On the morning of the election come into play all the actions and reactions since the last election and the news of the impending death of the Master. Party politics and political views may have come into play, indeed they are often defining factors when people choose their friends - indeed, a Socialist doesn't often jump into bed with a Fascist. In 'Middlemarch', the divide comes with those that desire reform and those that oppose it. There are the staunch Tories, in the form of James Chettam and Mrs Cadwallader, contrasting with the reformers that take on the guise of Mr Brooke and somewhat more successfully Will Ladislaw. One method of discovering how important something is, is to take it out of the situation. What would the character's relationships be like if there was no manipulation of power, if there was no difference between thought and spoken opinions? There would be much more truth and less deception, deliberately misleading or otherwise. Sometimes, as best demonstrated by Celia and Dorothea, it is best that there is a difference between thought and spoken opinions. But then in 'Middlemarch', it would have saved much trouble if everyone had made their intentions known, rather than misleading others about their preference. The relationships would be more truthful, but for the purposes of the book much less interesting. Part of the interest in the books is in the following of unpredictable relationships and situations. In 'The Masters', one really isn't sure who will win the election in the dying chapters. If I had known Crawford eventually becomes Master, I might well have stopped reading. There is the chance that I would have continued to see how he did it, but it wouldn't have been half as interesting. In 'Middlemarch' and 'The Masters', the manipulation of power is crucial to relationships, and consequently the success of the books. If it was not there, the books would be predictable and not enjoyable; politics are of the greatest importance especially in the plots drawn up by Eliot and Snow respectively. 1 "LA ULTIMA CRUZADA" by Bob Cordery ...read more.