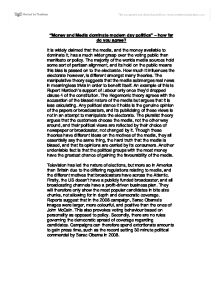 Money and Media dominate modern day politics &quot; how far do you agree?

"Money and Media dominate modern day politics" - how far do you agree? It is widely claimed that the media, and the money available to dominate it, has a much wider grasp over the voting public than manifesto or policy. The majority of the worlds media sources hold some sort of partisan alignment, and its hold on the public means this bias is passed on to the electorate. How much it influences the electorate however, is different amongst many theories. The manipulative theory suggests that the media submerges real news in meaningless trivia in order to benefit itself. An example of this is Rupert Murdoch's support of Labour only once they'd dropped clause 4 of the constitution. The Hegemonic theory agrees with the accusation of the biased nature of the media but argues that it is less calculating. Any political stance it holds is the genuine opinion of the papers or broadcasters, and its publicising of these views is not in an attempt to manipulate the electorate. The pluralist theory argues that the customers choose the media, not the other way around, and their political views are reflected by their choice of newspaper or broadcaster, not changed by it. ...read more.

America's heterogeneous nature means that local press are the standard newspaper to read and these already reflect the views of that state, which unlike Britain votes united in an electoral college. In the 1992 general election, with Kinnock and Labour the favourites, the sun released the headline, "Will the last person to leave the country turn out the lights". A few days later, after a shock conservative victory, they released a follow up headline, "It was the sun what won it". Just 3 years later they switched allegiance, with "Sun backs Blair", something pointed out as one of the factors in Labours landslide 1997 election victory. This, along with the fact the paper has backed the winner in all but 3 elections in the last 50 years, implies that Britain's biggest newspaper holds immense influence over the electorate. However, it can also be argued that with only 3 million papers in circulation, the Sun doesn't have enough readers to change the result of an election. Not only has this but it faced opposition from big papers such as the mail and the telegraph as well. ...read more.

The heterogeneous nature of the USA would obviously require more expenditure in a campaign, but the 5, 6, and sometimes 7 figure expenditures in senate races seem slightly out of proportion. In Japan the electoral system was making candidates of the same party campaign against each other, which gradually pushed the price of campaigns up and up until reform was enforced. The influence money was having on elections had created a rift amongst parties as well as losing a sense of democracy. It is clear that money and the media have a huge influence on voting behaviour, but not in the way it may first have been perceived. Where the theories generally carried the view that money could drive the media, and the media in turn influence the electorate, I believe it is changing voting behaviour in a different sense. Money and the media have glorified politics, and particularly in America have given it a Hollywood effect. The public are reacting to this by voting not based the manifesto and ideologies of candidates, but voting for the greatest 'celebrity'. Money and the media do play too great a role in modern day politics, and have replaced the electorate's voting on policy with its voting on personality. ...read more.

The student answers the question very well by referring to both of the ideas introduced in the question - money and the media - which is good as it shows that they have enough knowledge to answer the question. The ...

The student answers the question very well by referring to both of the ideas introduced in the question - money and the media - which is good as it shows that they have enough knowledge to answer the question. The student also refers to theories such as the "hegemonic theory" of the media, which shows that they can respond well to the idea in the question by adding their own knowledge of theories. In the introduction, they only talk about money when discussing how it affects the media, when they should mention it as a separate point - money doesn't just affect the media, it also affects campaigns in its own right. They go on to do this in the essay itself, but if they did it in the introduction, it would show the examiner right away that they can organise their knowledge.

The evidence used in this essay is excellent. The student uses a lot of statistics, such as "spending about $10 per vote he gained". This shows that the student understands that the amount Obama raised was huge and unprecedented, which helps to answer the question. It is good that they use Obama as a recent example as it shows they stay up-to-date with politics, but any essay on money in US politics would benefit from mentioning that Obama raised it largely over the Internet, as that was so new and innovative. The student also uses lots of facts, such as quoting names like "Ross Perot" and groups like "PACs", which is good as it shows that the student isn't just understanding that millionaire candidates exist but can prove it with factual knowledge. The student could improve this by using the full title rather than the abbreviation, so in this case "Political Action Committees" rather than just "PACs", because it would prove that the student knows the full meaning of the term. After you've used it in full once, it's fine to abbreviate again. This student then goes on to explain why the facts they have used are significant or insignificant: "This seems less of a ceiling..." shows that they have the understanding to say what the statistic seems to show, rather than just rhyming off lists of figures they have learnt. The conclusion to the essay is very good as it challenges established theories, which shows that the student has the understanding to make up their own mind. However, it is still perfectly fine to agree with the established theories you have learnt, as long as you can say why, because it still shows a considered judgement.

The political vocabulary used in this essay is excellent. Saying "they switched allegiance", for example, is better than saying "they decided to change their minds" because "allegiance" is often used as a word meaning support for a political party, and it shows better understanding than just using general phrases. The spelling, grammar and punctuation are all excellent, meaning that the examiner can focus on giving the student marks for knowledge and analysis rather than working out what they are trying to say.