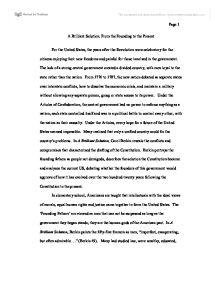 A Brilliant Solution: From the Founding to the Present

A Brilliant Solution: From the Founding to the Present For the United States, the years after the Revolution were celebratory for the citizens enjoying their new freedoms and painful for those involved in the government. The lack of a strong central government created a divided country, with men loyal to the state rather than the nation. From 1776 to 1787, the new nation debated as separate states over interstate conflicts, how to dissolve the economic crisis, and maintain a military without allowing any separate person, group or state access to its power. Under the Articles of Confederation, the central government had no power to enforce anything as a nation; each state controlled itself and was in a political battle to control every other, with the nation as their casualty. Under the Articles, every hope for a future of the United States seemed impossible. Many realized that only a unified country could fix the country's problems. In A Brilliant Solution, Carol Berkin reveals the conflicts and compromises that characterized the drafting of the Constitution. Berkin portrays the founding fathers as people not demigods, describes the solution the Constitution became and analyzes the current US, debating whether the founders of this government would approve of how it has evolved over the two hundred-twenty years following the Constitution to the present. ...read more.

Only a small percentage of the entire population has access to the amount of money it would take to finance a campaign. America was founded on the principals that all men were created equally and that any could be a leader if they were elected. The men who based our government on democratic ideals could not support those elected because they were the ones who were able to raise enough money to campaign. Many parts of the United States government has changed since the Constitution was signed; some changes are necessary others like the Patriot Act and the amount of money needed to campaign are ridiculous and undemocratic. "The men who framed the Constitution could not see into the future" (Berkin 205) but from the view from the future, it is difficult to comprehend that the founding fathers were not demigods and had no idea that the Constitution they created would bestow beatific effects lasting for generations. They were not sure their work would last, but they had a clear purpose and goals, and that created a brilliant solution for a new nation full of problems. Sources: Berkin, Carol. A Brilliant Solution : Inventing the American Constitution. New York: Harvest Books, 2003. "The Constitution of the United States," Amendment 5. ?? ?? ?? ?? Page 1 ...read more.