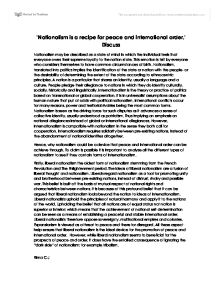 Nationalism is a recipe for peace and international order. Discuss

'Nationalism is a recipe for peace and international order.' Discuss Nationalism may be described as a state of mind in which the individual feels that everyone owes their supreme loyalty to the nation-state. This emotion is felt by everyone who considers themselves to have common circumstances at birth. Nationalism, translated into politics implies the identification of the state or nation with the people- or the desirability of determining the extent of the state according to ethnocentric principles. A nation is a particular that shares an identity, usually a language and a culture. People pledge their allegiance to nations in which they do identify culturally, socially, historically and linguistically. Internationalism is the theory or practice of politics based on transnational or global cooperation. It is in universalist assumptions about the human nature that put at odds with political nationalism. International conflicts occur for many reasons, power and territorial rivalries being the most common forms. Nationalism is seen as the driving force for such disputes as it advances a sense of collective identity, usually understood as patriotism. Thus implying an emphasis on national allegiances instead of global or international allegiances. ...read more.