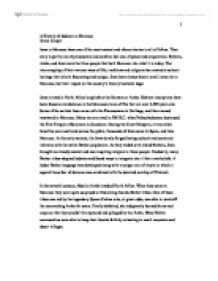 A history of Judaism in Morocco.

A History of Judaism in Morocco James Cooper Jews in Morocco have one of the most ancient and vibrant stories in all of Africa. Their story is partly one of persecution and conflict, but also of peace and cooperation. Berbers, Arabs, and Jews were the three people that built Morocco into what it is today. The intermingling of their various ways of life, traditions and religions has created a cultural heritage that is both fascinating and unique. Jews have always been a small minority in Morocco, but their impact on the country's history has been huge. Jews arrived in North Africa long before the Romans or Arabs. Hebrew inscriptions have been found on tombstones in the Moroccan town of Fez that are over 2,000 years old. Some of the earliest Jews came with the Phoenecians to Carthage, and then moved westward to Morocco. Many more arrived in 586 B.C. when Nebuchadnezzer destroyed the First Temple of Solomon in Jerusalem. During the Great Diaspora, a time when Israelites were scattered across the globe, thousands of Jews came to Spain, and then Morocco. In this early society, the Jews slowly forged lasting cultural and economic relations with the native Berber population. As they traded with inland Berbers, Jews brought an already ancient and awe-inspiring religion to those people. Gradually, many Berber tribes adopted Judaism and found ways to integrate into it their own beliefs. A Judeo-Berber language was developed along with a unique mix of rituals in which a superstitious fear of demons was combined with the devoted worship of Yahweh. ...read more.

As a minority that had always suffered to some extent from Arab persecution, Jews found that their lives were actually improved by foreign colonialism. With the establishment of Morocco as a "protectorate" of France in 1912, Jews were no longer second-class citizens to the Arabs - everyone except the French were second-class citizens. Some of those living in the cities were able to receive a french-style education, which led to a growth in the professional middle class. However, there was an incredibly wide gap between these new Jews and those who were still living in mountain tribes as they had for thousands of years. The way these people lived had changed little since the middle ages. The mellahs in the city were still crowded and miserable. Often a single tattered Torah was the only source of education for an entire community. However, despite the misery of the Ghetto, there were some benefits. The mellah held Jews together in a tight-knit community where they were able to preserve their unique identity. The lack of material riches was made up for by vibrant holidays, beautiful craftsmanship and strong family ties. Because of their segregation and confinement, "the Jews educated their own, leading to a high literacy rate, much higher than the Muslim community". (Sand, p.2) Perhaps the most important thing that held them together were their rituals. Moroccan Jewish rituals are a strange mixture of ancient Hebrew, Berber and Arab traditions. ...read more.

The speech was read in synagogues and mosques across the country and marked a profound change in public attitudes towards the Jewish population. It was not enough, however, to stop Jews from moving to Israel, the homeland. Since 1948, over 295,000 have emigrated to Israel. Today, the Jewish community in Morocco is only a small fraction of what it once was, numbering around 8,000. Of the Arab countries, Morocco has the closest relationship in Israel. Since independence, three Jews have been elected to parliament, including a Rabbi. This is a remarkable fact considering that 99% of the population is Muslim. King Hassan II, who died in 1999, was a strong supporter of peace and reconciliation between Israel in Palestine. He extended an open invitation to Jews of Moroccan descent who live in Israel (of which there are over 600,000) to return to Morocco. Few have returned, but tens of thousands make a pilgrimage each year. In 1993, after signing the self-determination agreement with the Palestinian Liberation Organization (PLO), Israeli Prime Minister Yitzhak Rabin made a formal visit to King Hassan II. More than anything this was symbolic of the goodwill between the two nations. Despite the persecution of the past, modern Jews have been very much accepted into Moroccan society. According to Rick Gold, a Jewish-Moroccan US Foreign Service Officer, "a visit to Jewish morocco is a lesson in the potential for Jewish-Muslim coexistence". Perhaps by looking at Morocco, modern Jews can learn how to overcome an unnecessarily b****y past and move towards a bright and peaceful future. ...read more.