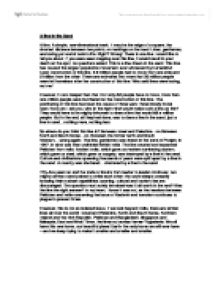 A line in the Sand

A line in the Sand A line. A simple, one-dimensional mark. It may be the edge of a square, the shortest distance between two points, or markings on the road. Lines, gentlemen, are boring yet useful tools in life. Right? Wrong! There is one line I would like to tell you about. If you were seen stepping over this line, it would result in your death on the spot, no questions asked. This is a line drawn in the sand. This line has caused the largest population movement ever witnessed by humankind. Upon construction of this line, 3.5 million people had to move from one side and 5 million from the other. There are estimates that more that 20 million people were left homeless after the construction of this line. ...read more.

The line created and separated Pakistan from India. Ancient India, which gave us modern numbering system, which gave us steel, which gave us surgery, was destroyed by a line in the sand. Culture and civilisations spanning thousands of years were split apart by a line in the sand. A country was shattered....shattered by a line in the sand. Fifty-five years on and the trade of insults from leader to leader continues; two mighty armies stand poised to strike each other; the world sleeps uneasily knowing their nuclear capabilities; sporting, cultural and tourism ties are discouraged. The question must surely be raised-was it all worth in the end? Was the line the right answer? In my heart, I know it was not, as the tensions between Pakistan and India concerning the issue of Kashmir and terrorism continues to plague in present times. ...read more.

However, do we realise that all human beings are born free and equal in dignity and rights. That all of us are entitled to all rights and freedom, without any distinction of any kind, such as race, colour, s*x, language, religion, political or other status. That every human being has a right to life, liberty and should not be subjected to torture or cruel inhuman or degrading treatment or punishment. All this because we do not agree with that side of the line. If we could just remember that both sides are on the same side of Earth, we would not have terrorism to fight today. We could all instead be living in peace and harmony. As the song says: We are a rock revolving around a golden Sun; We are 6 billion children rolled into one; Why should one baby feel so hungry as she cries? Lines in the sand bring saltwater to my eyes. ...read more.