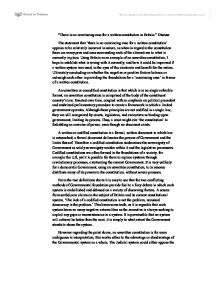 There is no convincing case for a written constitution in Britain. Discuss

"There is no convincing case for a written constitution in Britain." Discuss The statement that 'there is no convincing case for a written constitution' appears to be relatively incorrect in nature, as when in regard to the constitution there are many pros and cons surrounding each of the alternatives to what is currently in place. Using Britain as an example of an unwritten constitution, I hope to establish what is wrong with it currently, and how it could be improved if a written system was used, in the eyes of the electorate and benefit for the nation. Ultimately concluding on whether the negative or positive factors balance or outweigh each other in providing the foundations for a 'convincing case' in favour of a written constitution. An unwritten or uncodified constitution is that which is in no single referable format, an unwritten constitution is comprised of the body of the constituent country's law. Enacted over time, coupled with an emphasis on political precedent and enshrined parliamentary procedure to create a framework in which a limited government operates. Although these principles are not codified in a single law, they are still recognized by courts, legislators, and executives as binding upon government, limiting its powers. Thus, a court might cite 'the constitution' in forbidding an exercise of power, even though no document exists. ...read more.

In contrast a codified constitution has its laws entrenched, they are interpreted unambiguously, in an almost biblical, modus operandi. This disenables the Government from, 'coercing' the Judiciary into supporting a cause, as there is simply no other way to elucidate the entrenched law. An argument against increasing the power of the Judiciary, however, is that written constitutions are ruled upon by judges. Most judges are unelected and it is therefore undemocratic to take power away from our elected representatives and give it to judges who tend to be quite reactionary. Yet, with the compilation of both an increased length of scrutiny, and more of a Judicial involvement in interpretation of the constitution in the formulation of bills etc, one of the most admired points of an unwritten constitution is its ability to produce effective policy, quickly and efficiently in times of crisis for example, a written constitution greatly slows this ability. However a written constitution, perhaps accountable for shelling out weakened policies, moderates the ability of Government to fast-track radical policy and make large constitutional amendments on whim, a dangerous aspect of an unwritten constitution, perhaps culpable to the increasing threat of executive dominance. An example of this is Blair's reform of the House of the Lords. He was able to completely change half of our legislature without a referendum or other means of checking consensus. ...read more.

This consensus makes it impossible for a single government to overturn rights - as government defeats on the proposed detention of terrorist suspects demonstrate. Since 1998 the Human Rights Act has enshrined the European Convention on Human Rights into UK law, and now provides a focus for this culture of rights. Rulings by judges that anti-terror laws are 'non-compliant' with the Human Rights Act are very embarrassing for the government, and have effectively forced it to amend its laws. To summate, a written constitution provides ample evidence for both the advocation and dismissal of its properties. It seems to produce a state in which Government is well regulated, yet inefficient. It also seems to create a system in which ministerial and collective accountability are harder to avoid, as the laws and manner by which a written constitution is to be governed are unambiguous in nature. However this results in an inability to react to situation and change, this could leave written cultures behind as other societies develop. The accumulation of these points has lead me to the conclusion that although there is a 'case' for a written constitution, in my view it is not a 'clear' case, nations have survived well without a written constitution, the public is not clamouring for a one, therefore in a somewhat pragmatic conservatelised view point I believe radical change is unnecessary and would not be in the best interest of the public and governments currently using an unwritten system. ...read more.