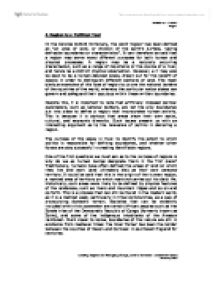 A region is a political tool.

A Region is a Political Tool In the Concise Oxford Dictionary, the word 'region' has been defined as "an area of land, or division of the earth's surface, having definable boundaries or characteristics". It can therefore be said that a region may serve many different purposes for both human and physical processes. A region may be a naturally occurring phenomenon, such as a range of mountains or the course of a river, and hence be a distinct physical observation. However, a it may also be seen to be a human-devised locale, drawn out for the benefit of people in order to distinguish different sections of land. The most obvious examples of this type of region to us are the national borders of the countries of the world, whereby the particular nation states can govern and safeguard their populous within these written boundaries. Despite this, it is important to note that artificially imposed political parameters, such as national borders, are not the only boundaries put into place to define a region that incorporates human activity. This is because it is obvious that areas show their own social, cultural, and economic diversity. Such issues present us with an interesting argument as to the relevance of politics in declaring a region. The purpose of this essay is thus: to identify the extent to which politics is responsible for defining boundaries, and whether other forces are also successful in creating identifiable regions. One of the first questions we must ask as to the purpose of regions is why do we as human beings designate them in the first place? ...read more.

Europe is a region that is currently locked deep in a period of terrific economic, social and cultural transition. Political endeavours have been brought about that increase as well as aid this evolution. In this world of ever-increasing international relations, the European Community evolved into the European Union following the signing of the Maastricht Treaty in February 1992 in order to promote the freedom of people, money and goods throughout the continent of Europe. With this vision in mind, the EU regulates such practices as the production of crops and the movement of livestock throughout the region in an attempt to harmonise the nations' economies. It is a further example to illustrate the positive view that a region can be used as a political tool. Unfortunately, as with any idea it isn't always perfect. The BSE (commonly known as 'mad-cow disease') crisis that swept through the British Isles in the late 1990s led to a massive drop in sales of British meat across the EU region and subsequently all over the world. As the Union does not actually govern the nations that are a part of it, there was and still is a definite slump in the British farming industry. Until faith is one hundred percent fully restored (an occurrence, it might me added, that is highly unlikely) the national economy will undoubtedly continue to suffer. Nevertheless, as a region the overall success of the EU had since led to the landmark induction of the single European currency, the Euro (�). ...read more.

Some have claimed that these organisations reduce national boundaries to irrelevance within some spheres of trade, as taxation is no longer an obstacle. Globalisation is a process through which all aspects of modern human existence; cultures, commerce and civilisation, are entities no longer restricted to their places of origin. All this is true up to a certain point. It can be argued that all regions of human designation may be seen as political tools. Although formal opinionated parties may not be a symbol of them, personal identity - our want to speak out and proclaim our pride in who we are and where we come from - is clearly important to a significant number of us. This passion may therefore define the boundary of a cultural region just as clearly as any national border. As the territorially ruling factions in our world today, governments continue to hold a tight grip on the borders and boundaries around us. But it is the people who ultimately decide upon the common interest of who is who, what is what and what is where. It also appears that economics is the engine that drives politics today - it seems that no state can be totally self-sufficient and be prosperous. This may be one reason for the demise of Communism in Eastern Europe in the late 1980s and early 1990s. However, this itself has brought the idea around almost full circle: a region of individually governed countries working in political union for their own advantage. ...read more.