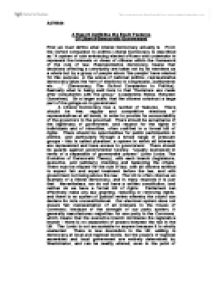 A Report Outlining the Basic Features Of Liberal-Democratic Government.

A Report Outlining the Basic Features Of Liberal-Democratic Government First we must define what Liberal Democracy actually is. From the Oxford companion to politics Liberal Democracy is described as "A system of rule embracing elected officers who undertake to represent the interests or views of citizens within the framework of the rule of law. Representative democracy means that decisions affecting a community are taken not by its members as a whole but by a group of people whom 'the people' have elected for this purpose. In the arena of national politics, representative democracy takes the form of elections to congresses, parliaments etc ...," (Democracy, The Oxford Companion to Politics). Basically what is being said here is that "Decisions are made after consultation with the group," (Leadership Styles, Between Ourselves). On a larger scale, that the citizens construct a large part of the goings-on in government. A Liberal Democracy has a number of features. There should be free, regular and competitive elections of representatives at all levels, in order to provide for accountability of the governors to the governed. There should be acceptance of the legitimacy of government, and respect for the rights of individuals and of minorities, often codified in a formal bill of rights. There should be opportunities for public participation in politics, and particularly through a broad range of pressure groups - this is called pluralism, a system in which all interests are represented and have access to government. ...read more.

Therefore there has to be a system of law and institutions which protect individual freedom. Anarchy cannot protect freedom. Democracy is the best known means of achieving that protection through collective institutions, but if it produces simply the tyranny of the majority it is not Liberal Democracy. 1.3 Constitutional protection of minority rights and barriers to the oppressive use of majority power are essential elements of Liberal Democracy, which is the antithesis of the socialist concept of democratic centralism. In many cases the lowest possible level for a decision is the level of the individual, and what is sought is to keep decision-making at that level if possible. Where that is not possible, if a decision can be taken at the level of a small local community, it should be taken there, rather than at national or supra-national level. 1.4 Equally; because some decisions have to be taken at the national, European or global level in order to be effective - for example in safeguarding peace, assuring human rights or protecting the environment - there need to be democratic institutions capable of taking decisions at that level. 1.5 The freedom of the individual is, however, limited or non-existent if he or she is prevented by economic deprivation, lack of education, disadvantage or discrimination from exercising choices about how to live or from participating in the democratic process. ...read more.

Creating a society which is liberal is part of the contest of ideas within society: liberal democracy is a system which allows people to live together in freedom and peace whether or not they share the same ideas. 1.10 Social and economic inequalities are a key issue in debates on political principles. When equality is pursued as a goal, it also tends to lead to the belief that the central state has the power to achieve it and must be trusted to do so, whatever the cost in liberty. Many of the most repressive regimes of the twentieth century amassed state power claiming that it was necessary to promote equality. 1.11 Rights and freedoms conflict with each other. The right to free speech can conflict with the right of minorities or even majorities not to be the subject of campaigns to stir up hatred. Religious freedom can be in conflict with a desire to protect young people from oppressive pressures to conform to particular life styles, whether by extreme cults or by traditions such as arranged marriages if they become forced marriages. Taxation restricts the rights of those who believe that they should not be paying towards things to which they are deeply morally opposed, such as military expenditure or abortion. 1.12 Liberalism as a philosophy provides no automatic answer to these conflicts of rights: indeed, its belief in democratic and constitutional procedures recognises their existence and provides mechanisms for their resolution. ...read more.