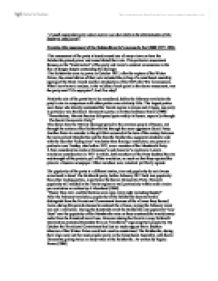 &quot;A small, unpopular party whose success was due solely to the determination of the leader to seize power&quot; Examine this assessment of the Bolshevik party's success in the USSR 1917-1924.

"A small, unpopular party whose success was due solely to the determination of the leader to seize power" Examine this assessment of the Bolshevik party's success in the USSR 1917-1924. This assessment of the party is based around one of many views on how the Bolsheviks gained power and consolidated their rule. This particular assessment focuses on the "brutalisation" of the party and Lenin's constant concessions in the face of danger despite contending his ideology. The Bolsheviks came to power in October 1917, after the capture of the Winter Palace; the consolidation of their rule included the calling of a constituent assembly, signing of the Brest-litovsk and the introduction of the NEP after War Communism. What I now have to analyse, is the validity of each point in the above assessment, was the party small? Or unpopular? And if so why? Firstly the size of the party has to be considered, before the February revolution the party's size in comparison with other parties was relatively little. The largest parties were those who directly contended the Tsarist regime in towns and villages, one party in particular was the Social Democratic party, as written by Susan Hasler (1989) ...read more.

During the Konstradt revolt the Bolsheviks lost popularity "July Days" saw the popularity of the Mensheviks raise as they countered the revolutionary mobs from the Konstradt naval base. However during the Kornilov coup Bolshevik intervention protected Kerensky from an "overthrow" regaining their popularity. By October the Provisional Government had lost so much support that a drunken takeover of the Winter Palace could not even be constrained. The Bolsheviks, during their reign were not the most popular party, in the Constituent Assembly, with Social Democrats gaining twice as many votes as the Bolsheviks. As written by Eugine Frazer (1984) "The bread queues grow longer every day and often, after standing for hours on end there is nothing left" Popularity, especially in the urban areas, was declining. This unpopularity, links to Lenin's success, he began to make concessions for the people, increasing his power and maintaining hold on power. He made himself more popular by ending the war, giving peasants the land they needed and giving the people a Constituent Assembly. ...read more.

concentrate large forces in any one location," This shows the determination of Lenin, to defeat opposition and maintain power, if we link this to the Constituent Assembly, we could say some sides in the "Whites" were better suited to govern the country, in particular the Social Democratic Party. Other views are also considerable, the Soviet view sees the events of October as a popular rising, which contends the view of unpopularity, and also contends the need to "seize power" as, in this view, many supported Lenin's right for power. I conclude that the assessment is false, although parts do correspond to the state of the party, at certain times; it is not generalisable of the events from 1917-1924, I agree the Bolshevik party was small, yet it grew as it's power became established, I agree that, at times the party was unpopular, but when It counted the people supported the "Reds" and as for their success, it cannot be based solely on Lenin's determination, but many other factors such as the weakness of opposition, conditions within Russia, and attitudes of the people. By Zak Smith L6AMO Words: 1087 ...read more.