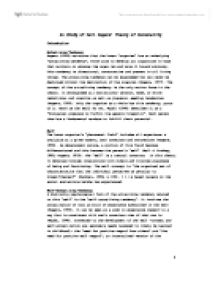 A Study of Carl Rogers' Theory of Personality

An Study of Carl Rogers' Theory of Personality Introduction Actualizing Tendency Rogers (1959) maintains that the human "organism" has an underlying "actualizing tendency", which aims to develop all capacities in ways that maintain or enhance the organism and move it toward autonomy. This tendency is directional, constructive and present in all living things. The actualizing tendency can be suppressed but can never be destroyed without the destruction of the organism (Rogers, 1977). The concept of the actualizing tendency is the only motive force in the theory. It encompasses all motivations; tension, need, or drive reductions; and creative as well as pleasure-seeking tendencies (Rogers, 1959). Only the organism as a whole has this tendency, parts of it (such as the self) do not. Maddi (1996) describes it as a "biological pressure to fulfill the genetic blueprint". Each person thus has a fundamental mandate to fulfill their potential. Self The human organism's "phenomenal field" includes all experiences available at a given moment, both conscious and unconscious (Rogers, 1959). As development occurs, a portion of this field becomes differentiated and this becomes the person's "self" (Hall & Lindzey, 1985; Rogers, 1959). ...read more.

Rogers' conception of self is rather broad. He does describe a variation of self: the "ideal self" which denotes the self-concept the individual would most like to possess (Rogers, 1959), but other explicit variations are not offered. Similarly, specific concepts related to identity and identity development are missing, although the self image is certainly revisable and undergoes change over the lifespan. Exactly when the differentiation of phenomenal field into self occurs is also not specified. Rogers concept of self-actualization is specifically related to the self and is thus different from Goldstein's use of the term (which matches the actualizing tendency) and also different from Maslow's which appears to incorporate both tendencies in one (Maddi, 1996). The actualizing tendency is fundamental to this theory. Rogers considers it "the most profound truth about man" (1965, p.21). He finds strong biological support for this tendency in many varied organisms. Rogers' conception of an active forward thrust is a huge departure from the beliefs of Freud and others who posit an aim for tension reduction, equilibrium, or homeostasis (Krebs & Blackman, 1988; Maddi, 1996). Rogers (1977) notes that sensory deprivation studies support this concept as the absence of external stimuli leads to a flood of internal stimuli, not equilibrium. ...read more.

Ryckmann (1993) notes that some studies have found non-defensive people are more accepting of others and Maddi (1996) cites numerous studies that indicate self-accepting people also appear to be more accepting of others. It is somewhat puzzling given his humanistic emphasis on individuality, that Rogers describes only two extremes of people. Maddi (1996) suggests these extreme characterizations of only two types may be due to this personality theory being secondary to a theory of therapy. It is appropriate for a theory of psychotherapy to concern itself with the two extremes of fullest functioning and maladjustment. However, when theorizing about all people, two types are insufficient. Carl Rogers was most interested in improving the human condition and applying his ideas. His person-centered therapy may well be his most influential contribution to psychology. Rogers' pervasive interest in therapy is what clearly differentiates him from Maslow, despite some similarities in their ideas. The person-centered approach has had impact on domains outside of therapy such as family life, education, leadership, conflict resolution, politics and community health (Krebs & Blackman, 1988). In my opinion, Rogers greatest contribution may lie in his encouraging a humane and ethical treatment of persons, approaching psychology as a human science rather than a natural science. ...read more.