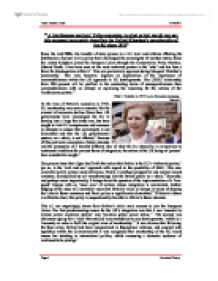 &quot;'A troublesome partner.' Using examples, to what extent would you say this comment accurately describes the United Kingdom's membership of the EU since 1973&quot;

"'A troublesome partner.' Using examples, to what extent would you say this comment accurately describes the United Kingdom's membership of the EU since 1973" Since the mid-1980s, the transfer of state powers to a EU level and reforms affecting the distribution of power in EU policy have challenged the sovereignty of member states. Since the United Kingdom joined the European Union through the Conservative Prime Minister, Edward Heath, it has been seen as the most awkward partner in the 'club' and has been a force for disintegration within it.1 This was particularly apparent during Margaret Thatcher's premiership.1 This view however, neglects an appreciation of the importance of accomodationism within the UK approach to EU developments. The UK/EU relationship from 1945-present will be profiled in the contrasting terms of uncooperativeness then accomodationism with an attempt at explaining the reasoning for the actions of the 'troublesome partner.'1 Plate 1: Thatcher in 1975 in pro-European campaign Source 2 At the time of Britain's accession in 1973, EU membership was seen as essential for the reversal of economic decline. Since then, UK governments have encouraged the EU to develop into a large free trade area, but have sought to limit EU competences and revenues in attempts to ensure that sovereignty is not diminished and that the UK governmental system, as a whole, is not affected.1 Because of this particular conception of state interests and the possession of a broadly different idea of what the EU should be in comparison to continental ambitions for various forms of integration, the notion of the UK being an 'partner' bear considerable weight.3 One present issue that aligns itself with ...read more.

1 Implications included hostility to any deepening of integration that could threaten national autonomy. It was on these grounds that Thatcher was well known as an 'agnostic' with respect to the 'European dream.' 1 However, until 1986, Thatcherism was, on the whole, accommodating with regard to the EC. The Thatcher governments claimed that the EC had started to reflect UK interests and ideals, initially suggesting that there could be an ideal marriage between EC membership and Thatcherism.1 At 1984, in Fontainebleu, Thatcher managed to negotiate a 66% rebate on UK VAT contributions, reducing the fiscal burden of membership.1 Following this, the creation of the Single Economic Area (SEA) and the Single Economic Market (SEM) in 1986 allied with Thatcherism's philosophy of the free market and promotion of enterprise culture. Mitterand's suggestion of the UK being in the slow lane of a 'two-speed Europe' went down well with Thatcher.1 In the period of 1986-90, the implications of the limited UK influence over the agenda for the deepening of integration became clear. Three developments occurred which posed dilemmas for UK policy. First, there were pressures to move towards EMU and some kind of political union.1 Both of these projects threatened to circumscribe the capacity for state assertion demanded by Thatcherism, as well as the credibility of national sovereignty.1 Second, membership of the ERM came to be seen as an essential prerequisite for participation in EMU. Thirdly, a social element was brought into the SEM, symbolised by the Social Charter. This contradicted the Thatcherism's raison d'�tre; deregulation of the Labour market and reduce the level of state welfare.1 Previously, the UK had distanced itself from the ERM, but now it was an area of political importance. ...read more.

The latter may be worried about losing his job however! In contrast, the CBI, 'The voice of British business,' is in strong support of the Euro. Conclusion: Concluding this essay is difficult. I would first state however, that a 'cautious partner' is perhaps a more apt way to describe Britain's membership of the EU. It is vital to recognise that all of the other nations are not all fully accommodating. The Danish rejection of the single currency last year, the fact that France is the largest EU law-breaker (including its own illegal continued ban of British beef) and the rejection of the Nice accords by the Irish are all good examples of other 'troublesome' factions.8 People who argue of Britain's troublesome nature should examine the EU budget first. It is telling that the UK contributes a net 5.5 billion Euros, the second largest contributor after Germany with 11 billion Euros. France, in comparison puts in 1 billion, whilst, Ireland and Spain are the greatest beneficiaries. Communautaire not 'troublesome partner' is perhaps a better way to put this.8 The main argument of the essay is that the public opinion of the UK being a 'spanner in the works of EU development' is partly incorrect. Accomodationism, 'with caution,' is broadly the path that the UK has followed since 1973. The policies to keep Britain in the EC in the 70s, the first two terms of the Thatcher government, Major's premiership and particularly that of Tony Blair, illustrate the accomodationism with caution principle. Perhaps the advent of Euro-creep will soften the public opinion to the single currency and Britain will change from being 'run by Europe' to 'running Europe.' It is probably in our nation's interest to do so. ...read more.

This is a very good, factually detailed essay. It contains a nice narrative, is beautifully written, and is well substantiated. However, I would have liked to have seen several things. Firstly, the 'awkward partner/cautious partner' tension expressed more fully. Secondly, for the examples to be flagged up more as examples *of* something. And thirdly, more comparison with other member states, since Britain is regarded as awkward by comparison.