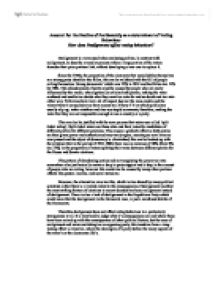 Account for the Decline of Partisanship as a determinant of Voting Behaviour How does Dealignment affect voting behaviour? Dealignment is a term used when analysing politics, in contrast with realignment, to describe a trend or process where a large portion of the voters abandon their prior partisan link, without developing a new one to replace it. Since the 1950s, the proportion of the electorate that would define themselves as a strong party identifier has fallen, this can be validated with the fall of people calling themselves 'strong democrats' which was 22% in 1952 and had fallen too 15% by 1994. ...read more.

This can also be justified with the new process that voters use called 'split-ticket voting'. Split-ticket voters are those who cast their votes for candidates of different parties for different positions. This causes a gridlock affect as both parties are then given power and authority and very rarely agree, meaning no new laws are ever passed and the object of democracy is .diminished, this can be backed up with the evidence that in the period of 1952-1988, there was an increase of 18% (from 9% too 27%) in the proportion of voters splitting their votes between different parties for the House and Senate elections. ...read more.

There is also a lack of dealignment in the Republican Party which could mean that the dealignment in the Democrat case, is just a newfound dislike of the Democrats. Therefore dealignment does not affect voting behaviour in a particularly strong sense at all. It is very hard to judge what it's consequences are and where these have been mixed up with the consequences of other political factors, but the case of realignment and voters switching too an opposing party, this tends too have a long-lasting effect in America, where the ideologies of a party define the many aspects of the voter's or the electorates life's. ?? ?? ?? ?? ...read more.