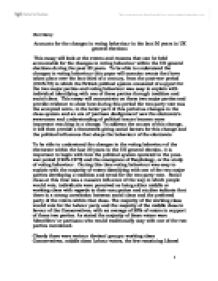 Marc Murray Accounts for the changes in voting behaviour in the last 30 years in UK general elections This essay will look at the events and reasons that can be held accountable for the changes in voting behaviour within the UK general elections during the past 30 years. To be able to understand the changes in voting behaviour this paper will examine events that have taken place over the last third of a century, from the post-war period (1945-70) in which the British political system consisted of support for the two major parties and voting behaviour was easy to explain with individual identifying with one of these parties through tradition and social class. This essay will concentrate on these two major parties and provide evidence to show how during this period the two-party vote was the accepted norm, to the latter part of this period as changes in the class system and an era of 'partisan dealignment' saw the electorate's awareness and understanding of political issues become more important resulting in a change. To address the causes of this change, it will then provide a framework giving social factors for this change and the political influences that shape the behaviour of the electorate. To be able to understand the changes in the voting behaviour of the electorate within the last 30 years in the UK general election, it is important to begin with how the political system operated in the post-war period (1945-1970) ...read more.

Though this theory has been criticised, especially in that it discounts individual experience and suggests that there is a dominant ideology which conditions how groups act, it does help to explain the increased fragmentation of class interests, especially those of the working class. The processes of partisan and class dealignment have produced a highly volatile electorate, with a diminished core of support upon which the parties can rely. This in turn means that the stable and predictable party system of the 1950s and 1960s is now highly unstable and unpredictable. Statistics show those identifications with either the Labour party or Conservative party in the period between 1964 and 1987 fell from 81% to 70%, even the most traditional of connections dropped from 35% to 25%. Butler and Stokes found that over 80% of those voters who recalled that their parents had supported the party dominant in their social class also voted for that party. On the other hand, only 58% of those who recalled that their parents had supported the party not dominant in their social class followed them. However, it seems that the influence of parents on their children's voting behaviour is less strong than it was, especially where both parents were Labour; only half of those responding to a survey in 1987 were Labour voters. This unpredictability on the part of the electorate created a different pattern in voting behaviour, one that was very 'volatile' and needed to be understood by the parties if they were to win them over. ...read more.

There is some evidence that voters are influenced by the paper they read. The tabloids are particularly significant in influencing voters who have a weak or non-existent identification. Until recently, most tabloids supported the Conservative Party although several swung to Labour in 1997. Since the 1992 election millions of voters have deserted the conservative party which has seen the dominance of British politics switch in favour of the Labour party. In Tony Blair the Labour party have a central figure that has put forward the image of a party that has unity and a leader that would go out of his way to be seen to lead his party in a new direction, and for the moment as statistics indicate this is what the majority of the British public seem to want. The models and approaches stated can offer insight into what key factors influence the behaviour of the voters, showing the changes from the post-war period 1945-1970 where individuals tended to vote from a traditional point of view. To the more recent characteristics of the electorate, that sees them taking more of an interest in the issues that the given party's are addressing. Showing the changes in voting behaviour by way of the statistics given above outlining the percentage of voters who have switch alliance and the reasons as to why this has occurred. This paper has given evidence to suggest that not only are there sociological factors that play a part in determining this behaviour, but there are political tactics that are employed by the given parties in an attempt to sway opinions. ...read more.