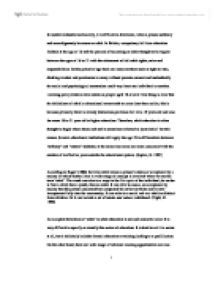 In modern industrialised society, it is difficult to determine, when a person suddenly and unambiguously becomes an adult. In Britain, compulsory full time education finishes at the age of 16 and the process of becoming an adult thought to be begins between the ages of 16 to 21 with the attainment of full adult rights, roles and responsibilities. In this period of age there are many markers such as right to vote, drinking alcohol and permission to marry without parents consent and undoubtedly the social and psychological maturation could vary from one individual to another. Learning policy tends to treat adults as people aged 19 or over. One thing is clear that the definitions of adult in educational terms tends to come later than earlier, this is because primarily there is already distinction provision for 16 to 19 years old and also for some 18 to 21 year old in higher education. Therefore, adult education is often thought to begin where these end and is sometimes referred to 'post initial' for this reason. Several educational institutions still apply the age 25 to differentiate between 'ordinary' and 'mature' students; at the same time some are more concerned with the number of ineffective years outside the educational system. (Squire, G. 1987) According to Roger (1986) the term adult means a person's status or acceptance by a society in which he/she lives: A wide range of concept is involved when we use the term 'adult'. The word can refer to a stage in the life cycle of the individual; he or she is first a child, then a youth, then an adult. It can refer to status, an acceptance by society that the person concerned has completed his or her novitiate and is now incorporated fully into the community. It can refer to a social sub-set: adult as distinct from children. Or it can include a set of ideals and values: adulthood. ...read more.

The blackboard is main teaching equipment, because the scarcity of the funds. For students teachers are the only source of information and they have the duty to impart knowledge to them. The process is simply teacher-oriented, textbook-centred, and examination-centred. As Hunter and Keehn (1985, 60) correctly stated: Learning (in China), including that by television, is largely by 'rote; teaching is lecture with few aids other than the chalk board. Except where the learning is taking place and is directly related to a particular enterprise, there is no 'learner involvement', no participatory techniques', no 'problem-solving methodologies'. (Shibao, G. 1996 p.1) There is no doubt that numerous aspects of education in china are at odds with modern Western thinking and learning. These issues are complex and difficult and remedial measures are not easily applied. Before examining these issues in detail, it seems indispensable to review briefly the history and purposes of adult education in China. Adult education was recognized as education of workers and peasants or free time education. With the expansion of educational scope and diversification of educational forms, it was now officially called adult education. (Shibao, G. 1996) China has formalised their education system probably longer than any other country. For more than 2000 years the history of Chinese values and education are based on Confucian principles. Confucianism is a philosophy of human nature that considers proper human relationships as the basis of society. Traditionally, teachers were listed among the five categories of those generally respected by society: the God of Heaven, the God of Earth, the emperor, parents and teachers (Zhou 1988). Students respect teachers as parents who would look after them with care and love. In response, students should obey their teachers just as they do their parents. British and American researchers 1986 and 1990 found that Chinese students were very loyal to their teachers. They never complained about the methods of teaching they received. ...read more.

These arguments may have an effect on people's perception of teaching and learning. (Shibao, G. 1996) In conclusion, it could be said that there is no consensus over the definitions of 'adult.' Adult education is very difficult to specify or classify. The curriculum in adult education is more diverse in terms of aims, content and it's so wide that it tests the limits of education itself. This diversification, what to teach and how to teach is common problem in Chinese adult education system and also United Kingdom's adult education system. Any debate about adult education cannot be successful without considering the historical, cultural, political, social and economic context. There is a long tradition of adult education in China, probably longer than any other country in the world. The roots of Chinese adult education stretch back in Confucianism. China needs more funds and equipments for better teaching. Students should be given the freedom and independence to ask questions in class. In United Kingdom adult education spread widely earlier than it did in other European countries. By comparing both countries adult participation in learning activities is rising. Despite the substantial increase in learning activity, many groups and individual remain excluded from education and training. This is the greatest danger of unemployment or unsatisfactory employment. Although government is spending a big amount of money on adult education, there is still an inclination in some institutions to favour notions of education and training to meet the need of certain age (young) from certain backgrounds (middle class). At work the most skilled continue to receive the most training. There is a need to consider the learning needs of communities. Funding regimes and learning structures no longer seem designed to exclude adult learners but, more and more to meet their needs. There are number of challenges there for the government by raising the demand for learning who are excluded or not interested and encouraging a culture of continuous learning and development at all levels. ...read more.