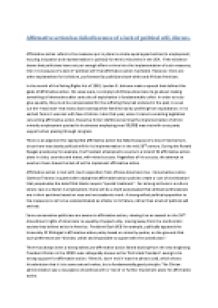 &quot;Affirmative action has failed because of a lack of political will&quot; Discuss

﻿Affirmative action has failed because of a lack of political will, discuss. Affirmative action refers to the measures put in place to create equal opportunities (in employment, housing, education and representation in politics) for ethnic minorities in the USA. If the evidence shows that politicians have not put enough effort or time into the implementation of such measures, then it is because of a lack of ?political will? that affirmative action has failed. However, there are other explanations for its failure, put forward by politicians both white and African American. In the month of the Voting Rights Act of 1965, Lyndon B. Johnson made a speech that defined the goals of affirmative action. His views were, to simply tell African-Americans to go about making something of themselves after centuries of exploitation is fundamentally unfair. In order to truly give equality, they must be compensated for the suffering they had endured in the past, to even out the ?head start? that many slave owning white families had by profiting from exploitation. ...read more.

A strong willed political opposition to the measures is not to be underestimated as a factor in its failure, rather than a lack of political will entirely. Some conservative politicians are averse to affirmative action, viewing it as an assault on the 14th Amendment rights of Americans to equality of opportunity, moving away from the meritocratic society they believe exists in America. President Bush (43) for example, publically opposed the University Of Michigan?s affirmative action policy based on minority quotas, on the grounds that such preferences are ?divisive, unfair and impossible to square with the constitution.? There has always been a strong willed pro-affirmative action liberal backing from the very beginning. President Clinton in the 1990?s was colloquially known as the ?first black President? owing to his strong support for affirmative action. ?Mend it, don?t end it? was the phrase used, which shows his admission that it is to some extent broken, but a fundamentally good principle. The Clinton administration saw a resurgence of political will to ?mend? or further implement plans for affirmative action. ...read more.

Although Fisher v. University of Texas is showing political will for affirmative action to continue, there is a view within some circles that university scholarship organisations favour racial minorities to such an extent that it is impossible to acquire a scholarship if you are a Caucasian male. The Former Majority Association For Equality, an organisation offering scholarships only to white males, believe that many white males applying to higher education institutions across the United States are being discriminated against purely based on their race, with no consideration as to their class or other obstacles preventing their achievement. This is yet another example of political will to end affirmative action. In conclusion, there was once a large force of political will behind affirmative action, particularly in the immediate aftermath of the Civil Rights Act. Political will for its implementation has however diminished over time and met steadily increasing opposition from all wings of American politics. Yes it has not had sufficient political will behind it, but political opposition to affirmative action is not to be underestimated as a cause of its failure, nor is the race focused approach . ...read more.