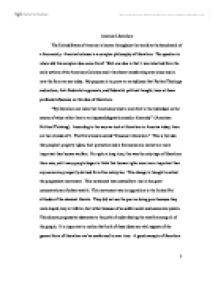 America Liberalism The United States of America is known throughout the world as the benchmark of a free society. America believes in a complex philosophy of liberalism. The question is where did this complex idea come from? Well one idea is that it was inherited from the early settlers of the American Colonies and it has been transforming ever since and is now the form we see today. My purpose is to prove to an audience that Puritan Theology and culture, Anti-Federalist arguments, and Federalist political thought, have all been profound influences on this idea of liberalism. "By liberalism we mean that Americans tend to look first to the individual as the source of value rather than to an imposed dogmatic creed or hierarchy" (American Political Thinking). According to the way we look at liberalism in America today, there are two strands of it. The first strand is called "Classical Liberalism." This is the idea that peoples' property rights, their protection and a free economic market are more important than human welfare. For quite a long time, this was the only type of liberalism there was, until many people began to think that human rights were more important than any economic prosperity derived from free enterprise. This change in thought is called the progressive movement. This movement was created by a rise in the great concentrations of urban wealth. This movement was in opposition to the Laizze Fair attitudes of the classical liberals. They did not see the poor as being poor because they were stupid, lazy or inferior, but rather because of an unfair social and economic system. ...read more.

The Federalists were the driving force of people behind the creation of the Constitution and perhaps they felt a need to create this document because they saw a need to regulate and create a government for a liberal society that needed more authority and structure. Although this may have been a good idea for a newborn country, some believe it still goes against true liberal notions, because it takes power and freedom away from the people and puts it in the hands of the government. "The federalist design for the U. S. Constitution was a negative one geared toward preventing evils from occurring rather than a positive one geared toward establishing a democratic utopia" (American Political Thinking). However, you may look at it as though the balance of authority and freedom in America today was set by the standard put forth by the Constitution and the Federalists ideology, which is very deeply imbedded with liberalism. Alexander Hamilton, who was one of the major contributors to the Constitution and the writer of a large portion of the Federalist papers, said, "Money is the vital and principal of the body of politic," (American Political Thinking). He was a Federalist that wanted to use the Constitution to form a financial aristocracy in the United States. "Hamilton envisioned a strong government by 'the wise, the good, and the rich,' a dynamic, centralized form of aristocracy that would strive for industrial financial power," (American Political Thinking). Even though it seems as if Hamilton saw that the United States was not to be an agrarian state like so many thought, his ideas of an aristocracy provide an alternative to the ideas of the liberal society that has been described. ...read more.

The main thing that Puritans, Federalists and Anti-Federalists have in common is that they are all American. Now that the obvious has been stated, observe how they all have contributed in different ways to the ideology of American political thought. The Puritans theology forced them to think a certain way. They wanted to live and thrive in a virtuous society and needed to live a life that would be successful so that they could discover that they were one of the chosen elite. They wished everyone would worship as they did; however their religion was never impressed on those who did not seek it. They gave us the notions of toleration for all people and an ambition to live the good life. The Federalists provided America with the idea of a big government, and with that they gave us free commerce, freedom from tyranny, and the notion that all men are created equal. No matter your ethnic background or religious preference, you'll have the same freedom to make anything you want of yourself. The Anti-Federalist gave society what the Federalists left out. They exemplified the people's rights, defined them and said that no matter what; no body of government or person could take these rights away. They gave the people the power over the government and made sure that the public was able to govern themselves. Freedom can be defined as the saying, that "I will stand there and listen to a man insult me and degrade my ideas while expressing his opinion, for I have the freedom to express my own." It is truly amazing that all these different ideas came together at once to create this fabulous nation and a very unique way of understanding liberty, freedom, and justice for all, under the theory of American liberalism. ?? ?? ?? ?? 1 ...read more.