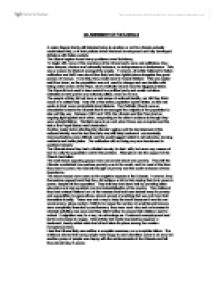 An Assessment Of The Liberals

AN ASSESSMENT OF THE LIBERALS A major dispute that is still debated today is whether or not the Liberals actually modernised Italy, or if their policies infact hindered development and fully developed divisions with Italian society. The Liberal regime faced many problems even its infancy. To begin with, none of the members of the Liberal party were real politicians; they were lawyers, doctors and university lecturers, or entrepreneurs or landowners. This was a reason for distrust amongst the people. However, all avidly believed in Italian unification and felt it was about time Italy took her rightful place alongside the great powers of Europe. To do this, they would need to 'create Italians'. ...read more.

The fight came to an end when Rome was occupied and the last of the Papal States were destructed. Another major factor affecting the Liberals' regime and the development of the national identity was the fact that Italy was still fairly backward economically. Communications were difficult, and the south lagged behind in rail networks, farming methods and fertile plains. The unification did not bring any new investment in southern industry. The Liberals knew they had a divided country to deal with, but were very unsure of how to unify the population and fix this problem. Attempts to win the support of the Church had failed. The main issue opposing groups were concerned about was poverty. ...read more.

There was not a way to help the south because it was its own worst enemy: plans made in 1906 to increase the number of small tenant farmers were completely thwarted by southerners, they were work-shy and an increase in criminal activities was seen and they didn't bother to ensure their children went to school. Emigration was, in a way, an advantage as it reduced unemployment and led to an increase in wages. Liberal Italy had made impressive progress: a backward, barely united state had at last taken its place among the modern European powers. I feel that Liberal Italy was neither a complete success nor a complete failure. The evidence shows that many people were happy to see Liberalism come to an end, but another group of people was happy with the achievements of the Liberals and felt they should stay in power. ...read more.