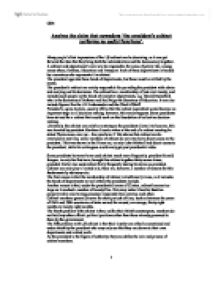 Analyse the claim that nowadays 'the president's cabinet performs no useful functions'.

Analyse the claim that nowadays 'the president's cabinet performs no useful functions'. Many people's first impressions of the US cabinet can be deceiving, as it can put forward the idea that they bring both the administration and the bureaucracy together. A cabinet rank department's role is to be responsible for areas of policy like, among many others, Defense, Education and Transport. Each of these departments is headed by a secretary who represents it in cabinet. The president appoints these heads of departments, but these must be ratified by the senate. The president's cabinet are mainly responsible for providing the president with advice and carrying out his decisions. The cabinet has a membership of just over twenty, and includes such people as the heads of executive departments, e.g. Donald Rumsfield who is the Secretary of Defense and Rod Paige the Secretary of Education. It can also include figures like the UN Ambassador and the Chief of Staff. President's, upon election, usually affirm that the cabinet assembled would become an important stage in all decision making, however, this rarely happens. Some presidents have strived for a cabinet that would work on the foundation of collective decision making. ...read more.

The final reason, as president Clinton once showed, cabinet members are not always selected to do the job, they may be picked for other reasons, for example, when Clinton selected his cabinet so that it would 'look like America'. Cabinet does not usually play a decisive role in making any policy decisions, this function is usually performed by smaller informal groups, such as bilateral meetings where the president and cabinet member meet on a one-to-one basis. The cabinet can also be considered or seen as fairly informal, due to the fact that cabinet meetings take place irregularly. Since the 1933 New Deal there has been a huge increase in Federal government activity, it was also clear that the federal administration could not cope with this increase in activity, so the Brownlow committee in 1939 recommended a major reorganization of the executive branch. Eight years later Congress passed the legislative reorganization act, this established the Executive Office of the President (EXOP). The main function of EXOP is to improve the presidents control of the rest of the bureaucracy. Some have said that the US would now be ungovernable without EXOP. Presidents also place more trust within EXOP than they do with the heads of the federal bureaucracy, there are four apparent reasons for this. ...read more.

EXOP has both its strengths and weaknesses. In times of crisis, such as the Cuban missile crisis of 1962, there is a quick response. Secondly, it can the burden off the president, for example, the WHO maintain a liaison with congress. EXOP also gives the president control over implementation, e.g. the OMB prioritises spending after Congress approves the budget. EXOP, however, has its weaknesses. It has been both seen and shown that EXOP can become too powerful. This was shown in 1972 - 74 when Bob Halderman and JD Ehrlichmann ruled the Whitehouse and controlled all access to Nixon. It can again be shown by members of the NSC who can overshadow the secretary of state, e.g. 1976 - 80 J Carter. Staffs of EXOP have a purely advisory role, they have no executive powers within the federal bureaucracy. EXOP can also become to big, therefore becoming difficult to manage and control. Responses to this included increasing the size of the departments to help control the cabinet departments. To conclude, I think from the evidence above it is clear that the Cabinet's role is dwindling, this can be accounted for by the increased use of EXOP. However the cabinet's role could be greater, but this is partially the choice of the president who must decide if he will find them useful. GSB 1 ...read more.