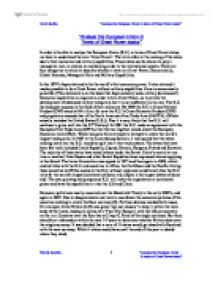 &quot;Analyse the European Union in Terms of Great Power status&quot;

"Analyse the European Union in Terms of Great Power status" In order to be able to analyse the European Union (E.U.) in terms of Great Power status, we have to understand the term 'Great Power'. The term refers to the ranking of the states due to their economic and military capabilities. These states can be shown to play a managerial role, in relation to maintaining order in the international system. There are four categories in which to describe whether a state is a Great Power; Economically, Global Interests, Managerial Role and Military Capabilities. In the 1970's Japan claimed to be the world's first economic power. It also claimed it maybe possible to be a Great Power without military capabilities if one is economically powerful. (This statement is on the basis that Japan actually lacks military dominance!) Economic capabilities is required in order to be a Great Power, as it permits the development of advanced military weaponry, but it is not sufficient on its own. The E.U. has had great success in the field of their economy. By 1998 the E.U.'s Gross National Product (GNP) stood at $6 trillion. So now the E.U.'s Gross Domestic Product (GDP) and population exceeds that of the North American Free Trade Area (NAFTA). (Which actually includes the United States (U.S.)). Plus it is very likely that the E.U. will continue to grow well into the 21st Century! In 1991 the E.U. made an agreement with the European Free Trade Area (EFTA), that the two together would create the European Economic Area (EEA). Which has gone from strength to strength to create the world's largest trading area. ...read more.

Either this takes place, or the E.U member state votes could be wielded in concert as a block vote, making the E.U's voice particularly powerful in international affairs. The Single European Act of 1986 was supposed to improve community action over foreign and security policy by putting it on a legal basis. The ending of the Cold War pushed European Political Cooperation (EPC) up the agenda, and at Maastricht a Common Foreign and Security Policy (CFSP) was to be a second pillar of the E.U. Under the CFSP the European member states do confer with each other and vote together whenever possible. However, policy disputes mean this procedure is little more than an 'exchange of information.' Great Powers should be able to maintain their security against all others, independently. They must be in the front rank of military powers, possessing a Strategic Nuclear Capability. Indeed rank suggests they should be self-sufficient military. There should be no other power superior to them, although there could be others of comparable status. The 'Common Foreign and Security Policy' (CFSP) (the successor of the EPC), came into being with the Masstricht Treaty, which looked to a European Military Dimension. It covers "all questions related to the security of the Union, including the eventual framing of a common defence policy, which might in time lead to a common defence." Its objectives are; -To safeguard the common values, fundamental interests, and independence of the Union. - To strengthen the security of the Union and its Member States in all ways. - To preserve world peace and strengthen international security. - To promote international cooperation. ...read more.

So yes economically the E.U is a great power. The E.U's global interest has shown that it has the potential to be a great power. The E.U possess the old imperial power. But the member states seem to work with their links as a state, rather then as the 'E.U'. Which caused conflict in the past. But the E.U itself has no tangible interests outside of its own borders. In terms of its managerial role, it could be described as great power, due to Britain and France holding permanent seats on the U.N's security council, and so has the power to veto. Members have made important contributions to peacemaking across the glob, for example the Gulf War 1991. However, few of these positions are actually held by the E.U itself. Also the E.U is unable to deal with crisis upon its borders. Yes the E.U possess nuclear weapons, but they belong to the state members, rather than the E.U. NATO serves to defend Europe. (The U.S.A). It has Eurocorps, which is expanding, but it is not much of a military force. The E.U's military on a global scale has no comparison to the likes of; China who possesses the world's fastest growing military budget. Japan's high-tech equipment and of course the U.S who has the best and strongest military army and forces in the world. The E.U is too dependent on the U.S to even think about challenging them or any other of the states, stated. The E.U could be described as a 'Regional Power', but not really a Great Power. But it is a state with a lot of potential. David Jacobs "Analyse the European Union in terms of Great Power status" 1 David Jacobs "Analyse the European Union In terms of Great Power status" ...read more.