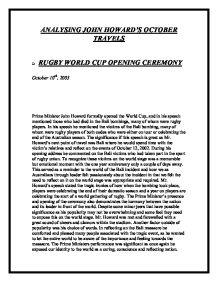 ANALYSING JOHN HOWARD'S OCTOBER TRAVELS * RUGBY WORLD CUP OPENING CEREMONY October 10th, 2003 Prime Minister John Howard formally opened the World Cup, and in his speech mentioned those who had died in the Bali bombings, many of whom were rugby players. In his speech he mentioned the victims of the Bali bombing, many of whom were rugby players of both codes who were either on tour or celebrating the end of the Australian season. The significance if this speech is great as Mr. Howard's next point of travel was Bali where he would spend time with the victim's relatives and reflect on the events of October 12, 2002. During his opening address he commented on the Bali victims who had taken part in the sport of rugby union. To recognize these victims on the world stage was a memorable but emotional moment with the one year anniversary only a couple of days away. This served as a reminder to the world of the Bali incident and how we as Australians through leader felt passionately about the incident in that we felt the need to reflect on it on the world stage was appropriate and required. Mr. Howard's speech stated the tragic ironies of how when the bombing took place, players were celebrating the end of their domestic season and a year on players are celebrating the start of a world gathering of rugby. ...read more.

The first thing to note is that US is Australia's security ally. Canberra's commitment to the US is undisputed and unquestioned. However, Sino-US relations are chugging along, with international terrorism overriding all other US concerns. Beijing is quietly expanding its political and economic space with an international profile. Its charm offensive has also captivated Canberra, further reinforced by the lure of a seemingly limitless market in China for its gas and other raw materials. During Hu's visit, another large contract for the supply of gas from Australia over many years was announced. This was significant as it secured a large content of gas supply for Australia for many years to come. At a political level, Canberra sees an advantage in cultivating ties with China to neutralize its image in Asia as the US "sheriff." Its growing relationship with China tends to validate its Asian credentials. There is quiet confidence in Canberra that it can simultaneously develop and manage its relations with Washington and Beijing. China is already Australia's fourth largest and fastest growing export market, estimated at about A$18 billion (US$12.7 billion) a year. Hu told the Australian parliament that the scope for economic ties between the two countries was immense. How will Canberra manage this difficult task of reconciling its growing economic stakes with China and security alliance with the US? The hope is that Canberra might not have to make this choice, at least not for quite a while. ...read more.

And I want on behalf of all of the Australians present to express my gratitude to the leaders and the people of Indonesia for the courtesies that they have extended not only in relation to today but for generally over the last the year. We've also learnt to control our anger and direct it towards identifying and punishing and bringing to justice those who perpetrated this terrible deed. And in all the time that has gone by we have retained a great passion and a great affection for the lovely people of Bali who have suffered so much. And so my fellow Australians and those from many other nations who gather here today to mark the first anniversary of the attack on the 12th of October last year, can I say again to those who lost their loved ones, as I did a year ago, that there were 19 and a half million Australian hearts that had, in every one of those hearts a corner of affection and support for those who lost so much. We haven't forgotten you, we never will. Australians will never forget the 12th of October 2003, but it has taught us a number of things about ourselves, it's taught us about our strength and it's taught us about the need to cooperate with others in the ongoing fight against the terrible deeds and the terrible hatreds that caused so much pain and so much misery a year ago today. The words of the speech tell the whole story as Australia has reflected and has been a huge part of the repairing process. ...read more.