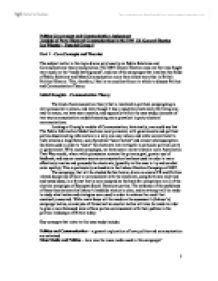 Analysis of Party Electoral Communications in the 1997 UK General Election.

Politics Government and Communication Assignment Analysis of Party Electoral Communications in the 1997 UK General Election Ian Wheeler - Tutorial Group 4 Part 1 - Core Concepts and Theories The subject matter in this topic draws very heavily on Public Relations and Communications theory and practice. The 1997 General Election was one that was fought very much on the "media battleground", and one of the campaigns that involves the fields of Public Relations and Mass Communication more than almost any other in British Political History. This, therefore, I feel is an excellent forum in which to discuss Politics and Communication Theory. Initial thoughts - Communication Theory The kind of communication theory that is involved in political campaigning is very persuasive in nature, and even though it has a reputation historically for being one-way in nature, we have seen recently, and especially within the case study, elements of two way communication models becoming more prevalent in party electoral communications. Looking at Grunig's models of Communication, historically, one could say that The Public Information Model has been most prevalent, with governments and political parties disseminating information in a very one-way nature, and while commitment to truth remains a large factor, use of practical "scare tactics" and almost wild assumption has been used in order to "scare" the electorate into voting for a particular political party or government. With recent campaigns, we have seen a move toward a more Asymmetric Two-Way model, where while persuasion remains the primary goal, greater use of feedback, and source-receiver-source communication has been used in order to more effectively involve and persuade the electorate, (possibly in this case to try and combat voter apathy). This is particularly noticeable in the Labour Election Campaign of 1997. The campaign, that will be studied further below, drew on several PR and Politics related disciplines of how to communicate with the electorate, using both new and tried and tested ideas, in a format that is now accepted as the basis for comparison in all of the election campaigns of European Social Democrat parties. ...read more.

Through careful use of these press endorsements, it is my belief that Labour managed to gain a substantial advantage in the race, and still uses the press with as much evident skill today. Not even a chance - The headline opinion polls The switch in newspaper allegiance was just one of the more unusual aspects of this campaign. Labour may have had an easy ride on the back of a Conservative party perceived as "sleaze ridden" by recent press coverage, but even at the outset, headline opinion polls showed on average, a 22 per cent lead for Labour. None gave the Conservatives more than 31 per cent of the vote. While there was skepticism in the press initially of this result, it was eventually proved that Labour would stay overwhelmingly ahead and that only 3 surveys would show the Conservatives above 33 per cent of the possible vote. Until the end, both parties and indeed the media at large (possibly in an attempt to counter voter apathy) attempted to portray the possibility of a close finish, but most commentators based their thinking on the fact that Labour had won. The Debate One of the other main communication events of the campaign was the possibility of a televised debate between the leaders of each of the main parties. John Major expressed his willingness to participate in a televised leadership debate before the election. This led to delicate negotiations between the broadcasters and the parties, when Peter Mandelson brought the issue to the fore in 1997. The idea, which had been thrown about by various broadcasters since the 1970's, was now rejected by John Major; he did not welcome the idea of a debate, and the thought that the election might turn on a single incident in the studio confrontations. Each of the TV networks submitted proposals for their own televised debate series; after much intense diplomacy between parties and networks, including possible court action by the Liberal Democrats if they were left out of the proceedings, as well as wrangling over minutes of onscreen coverage for each individual leader. ...read more.

The advantage for the celebrity being closer links with what may eventually be the government in power. The Results At the end of the campaign, with most major communication that each party wished to make complete, the results were already quite starkly obvious. Closing opinion polls showed a huge swing toward Labour, and even "The Sunday Telegraph" went with the headline "It's all over, admit Top Tories". Initial forecasts were for a victory with a majority of between 60 and 80. Tony Blair was confident of being about 10 per cent ahead, and the Lib Dems were confident of major gains as well. The media could see a Conservative defeat on the horizon, and ran several stories about Tory Leadership struggles. Conservatives themselves banded together to maintain a common front as disaster loomed. The BBC and ITN's exit polls confirmed the swing to Labour, and the 1- per cent swing emerged as one of the biggest swings in results since the war; Seven Cabinet ministers were defeated, and by the end of counting, Labour had won 418 seats, making a majority of over 179, and a clear 12.5 per cent lead over the Conservatives. On Friday 2 May, 1997, Tony Blair became the fifth ever Labour Prime Minister. The results alone show how important coherent and effective communication is to a political campaign. The examples shown here, at every point describe how failures in Communcation and strategy by the Conservatives, along with an unfavourable set of circumstances led to an unprecedented defeat for the Conservatives, and how a coherent, well planned and coordinated set of messages and tactics such as those used by Labour produced a massively successful campaign. The facets of political communication indeed are complicated ones, and are no more complicated for politicians than at election times; the importance of clear and useful communications becomes obvious in a situation where the political process becomes a "battle for survival". ...read more.