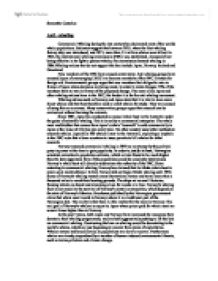 Anti - whaling Commercial Whaling during the last century has decimated most of the worlds whale populations. Estimates suggest that between 1925, when the first whaling factory ship was introduced, and 1975, more than 1.5 million whales were killed. In 1946, the international whaling commission (IWC) was established. Accused of not being effective in its fight to protect whales, the commission banned whaling in 1986.Whaling nations that do not support this ban include Japan, Norway, Iceland and Greenland. New members of the IWC have caused controversy. Anti whaling groups have accused Japan of encouraging LEDC's to become members of the IWC in return for foreign aid. Environmental groups argue that new members feel obliged to vote in favour of Japan when decisions are being made. ...read more.

Since 1987, Japan has conducted an annual whale hunt in the Antarctic under the guise of scientific whaling. This is in reality a commercial enterprise: The whale meat and blubber that comes from Japan's whale "research" is sold commercially in Japan at the value of 4 billion yen every year. No other country uses lethal methods to research whales. Japan kills 300 whales a year in the Antarctic, exploiting a loophole in the IWC rules that allows countries to issue permits to kill whales for lethal research. Norway resumed commercial whaling in 1993 as an attempt by the political party in power at the time to gain popularity. In order to justify its hunt, Norwegian scientists calculated a population estimate, which as later found to be much higher than the data supported. ...read more.

Brochures published by the Norwegian government claim that whale meat is sold in Norway where it is a traditional part of the Norwegian diet. The reality is that there is little market for the meat in Norway. The real goal of Norway's whalers is export to Japan where prices paid for whale meat are several times higher than in Norway. In the past 3 years, both Japan and Norway have increased the resources they devote to their whaling programmes, and are both aggressively pushing to lift the ban on commercial whaling. Overturning the ban on whaling would be devastating to the world's whales, which are just beginning to recover from years of exploitation. Whales mature and breed slowly, so populations are slow to recover. Furthermore whales are already jeopardised by a number of human induced environmental threats, such as toxins pollution and climate change. Samantha Costelloe ...read more.