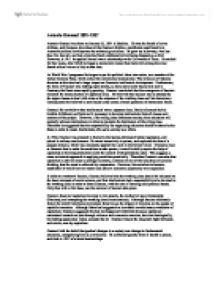 Antonio Gramsci 1891-1937 Antonio Gramsci was born on January 22, 1891 in Sardinia. He was the fourth of seven children, and Gennaro, the oldest of the Gramsci children, contributed significantly to Antonio's political development by embracing socialism. He grew up in poverty, was less than five feet tall, and had a hunched back, attributed to him being dropped as a child. However, in 1911 he applied for and won a scholarship to the University of Turin. He studied for four years, after which he began a journalistic career that made him among the most feared critical voices in Italy at that time. ...read more.

However, if the ruling class dominates society, then education will naturally educate intellectuals in order to maintain the dominance of the ruling class. Therefore he suggested that the responsibility for organising education should be taken by the State in order to create intellectuals who serve society as a whole. In 1926, Gramsci was arrested in Rome by the fascist-dominated Italian legislature, and placed in solitary confinement. He wrote extensively in prison, and explored the idea of a peasant alliance, which was concretely applied by Lenin in the Soviet Union. It became clear to Gramsci that in order for socialism to take power, it would initially require the help of capitalists to develop production under the control of the proletarian state. ...read more.

Only then with a firm base, can the removal of fascism take place. Gramsci observed capitalism develop in two strands, the method of open dictatorship (Fascism); and corrupting the working class (Americanism). Although fascism ultimately failed, the world Communist movement failed to see the impact of America on the people of capitalist countries. Although Marx had suggested an inevitable revolutionary overthrow of capitalism, Gramsci suggested this had not happened worldwide because capitalism maintained control not just through violence and economic coercion, but also ideologically, by making upper-class values accepted by all. Gramsci forsaw the long term fight for hearts and minds, won by capitalism. Gramsci held the belief that gradual changes in a society can change its fundamental structures, catogorizing him as a revisionist. He sufferered greatly from ill health in prison, and died in 1937 of a brain haemorrhage. ...read more.