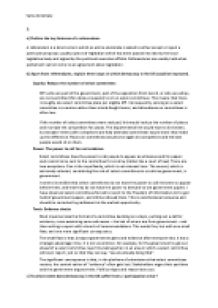 Apart from referendums, explain three ways in which democracy in the UK could be improved.

﻿Sama Al-Saltany 1. a) Outline the key features of a referendum. A referendum is a direct vote in which an entire electorate is asked to either accept or reject a particular proposal, usually a piece of legislation which has been passed into law by the local legislative body and signed by the pertinent executive official. Referendums are usually held when parliament cannot come to an agreement about legislation. b) Apart from referendums, explain three ways in which democracy in the UK could be improved. Quality: Reduce the number of select committees MPs who are part of the government, part of the opposition front bench, or who are whips, are not permitted (for obvious reasons) to sit on select committees. This means that there is roughly one select committee place per eligible MP. Consequently, serving on a select committee is a routine rather than a hard-fought honor, and attendance on committees is often low. If the number of select committees were reduced, this would reduce the number of places and increase the competition for places. The departmental link would have to be broken, but broader remits with competent and fully attended committees would more than make up the difference. Places on committees would once again be competitive and the best people would sit on them. Power: The power to call for real evidence Select committees have the power to call people to appear as witnesses and for papers and records to be sent to the committee for scrutiny (rather like a court of law). There are two exceptions. One is the royal family, which is not relevant here. The second, which is extremely relevant, considering the role of select committees to scrutinise government, is government. It seems incredible that select committees do not have the power to call ministers to appear before them, and that they do not have the power to demand to see government papers. ...read more.

c) To what extent are the major UK parties internally united over ideas and policies? The major political parties in the UK are not united in the slightest over their ideas and policies. The Conservative Party thinks that individuals should own and control businesses and services and make profits from them; the government should not interfere with these things. If this creates a gap between rich and poor, then it's not down to the government to sort it out. It's all about survival of the fittest. The labour government believe they should work with private companies to provide good public services. The government should be involved in helping to close the gap between rich and poor by providing opportunities for those in need. All public services such as schools and hospitals need to receive funding from the government in order to provide good-quality services that are available for everyone to use. The Lib Dems, are somewhere between the Labour and Conservative parties in their beliefs. They believe in personal freedom and a fair and open society where there is equality for everyone and strong communities. This can be achieved through free healthcare and education for all and by encouraging business to flourish but not interfering. 4) a) Distinguish between a mandate and a manifesto. A mandate is the authority granted by a constituency to act as its representative The concept of a government having a legitimate mandate to govern via the fair winning of a democratic election is a central idea of democracy. New governments who attempt to introduce policies that they did not make public during an election campaign are said to not have a legitimate mandate to implement such policies. Elections, especially ones with a large margin of victory, are often said to give the newly elected government or elected official a mandate to implement certain policies. Also, the period during which a government serves between elections is often referred to as a mandate and when the government seeks re-election it is said to be seeking a "new mandate". ...read more.

What is my view on reform? - Taking into account the strengths and weaknesses of the current FPTP electoral system I feel that Westminster should reform the FPTP system as I feel that the system itself is fundamentally unfair as it has no direct link between % 0f votes received and % of seats won by the party. Take the 2005 General Election for example ? Labour got 35.2% of the vote, 54.9% of the seats won and 355 seats altogether when you compare this with the Conservatives results you can see a serious case of over representation on Labours account and a serious case of under representation on the Conservatives account. The conservatives in turn received 32.4% of the vote (this is only 2.8% less than labours 35.2%) and yet they only received 30.7% of the seats ( which is a massive 24.2% lower than % or Labour seats won) to me this seems unfair as the Conservatives were only 2.8% behind Labour in the % of votes received. This therefore shows that there is no direct link between % of vote received and % of seats won. This case of over and under representation can question labours electoral mandate ? do they have the authority? ? This is why I feel that Westminster should reform the current electoral system. Which system do I suggest? - For an electoral system I feel that we need one which has proportional representation and I feel that the Party List system is the better choice as it is aimed at securing a close representational match between %of vote received and % of seats won and this is the main reason why I support the Party List system as I feel that overall it will represent all the parties fairly. Yes the Party List system does have its disadvantages but what we need to remember is that there is no perfect electoral system, we simply have to choose the one system that benefits the country and its people the most. ...read more.