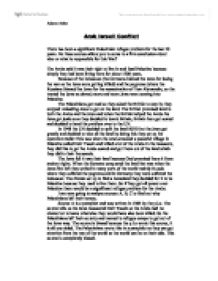 Arab Israeli Conflict There has been a significant Palestinian refugee problem for the last 50 years. Do these sources allow you to come to a firm conclusion about who or what is responsible for this War? The Arabs said it was their right to live in and lead Palestine because simply they had been living there for about 1300 years. Because of the holocaust (the Germans blamed the Jews for losing the war so the Jews were getting killed) and the pogroms (where the Russians blamed the Jews for the assassination of Tsar Alemandre, so the treated the Jews as slaves) more and more Jews were coming into Palestine. The Palestinians got mad so they asked the British to step in; they stopped unloading Jews to get on the land. The British promised land to both the Arabs and the Jews and when the British helped the Arabs the Jews got jealous so they decided to b**b Britain, Britain then got scared and decided to hand the problem over to the UN. In 1948 the UN decided to split the land 50/50 but the Jews got greedy and decided to take all the land by doing this they set up the operation Dallet This was when the Jews attacked a peaceful village in Palestine called Deir Yassin and killed a lot of the Arabs in the massacre, they did this to get the Arabs scared and get them out of the land which they did in their thousands. ...read more.

Sources A and B completely differ. So this is a unreliable source. Source C is written by an Irish journalist in 1961 so this tells us the source is not biased because he is not an Arab or a Jew. Source C totally disagrees with source B. It disagrees with source B because source B says that the Arab leaders ordered the Arabs to leave Palestine so the Arab armies could get in but source c says the journalist next decided to test the charge that the Arab evacuation orders were broadcasted by Arab radio this could be done because the BBC monitored all the middle east broadcasts they can be seen in the British museums, there was not a single appeal, or order, or suggestion about evacuation from Palestine from any Arab radio station in or out of Palestine in 1948. They were repeated appeals and even direct orders to the Palestine civilians to stay put. This is a reliable source. I will now look at source D, E and F to find out why refugees are still living in refugee camps. Source D is from a Palestinian refugee on the work of the UN it says we continued to refuse houses and compensation offered by the UN because they didn't want anything apart from their homeland. ...read more.

In the north Syrian forces quickly defeated the Israelis and then took the Golan Heights, but were forced back by Israeli reinforcements. At this point the Soviet Union threatened to intervene and the US government ordered the Israelis to agree to a truce. When the war ended on 24 October, little had changed, but massive casualties and damage had been caused. Because there were too many biased sources I was not able to find out who was to blame for Arab refugee problem. The one source that was not biased, source C said that source B from the Israeli foreign minister is not true now we can believe this because he was not a Jew or an Arab. Source B says that the Arabs were ordered to leave Palestine but source C says that the journalist checked what was been broadcasted in the Middle East and he said there was no appeal to the Arabs by their leaders to leave instead they were saying to them stay and there was even direct orders for them to stay but the source does not say what happened it just disagrees with what the Israeli foreign minister says. Source D is from Arab refugees they say we are not accepting anything from the Americans all we want is our homeland back but that all looks unlikely so maybe they should accept the houses maybe that could make the problem better. Adeem Azhar ...read more.