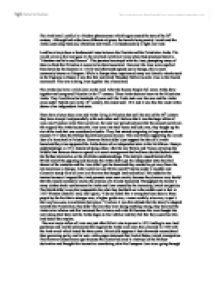 The Arab Israeli conflict is a Modern phenomenon which began around the turn of the 20th century. Although both sides have different religions, the Israelis being mainly Jewish and the Arabs containing Muslims, Christians and Druze, it is fundamentally a fight over land. Land has always been a fundamental issue between the Zionists and the Palestinian-Arabs. The Jewish claim to the land goes all the way back to biblical times when God promised Israel to "Abraham and he's seed forever". This promise has stayed with the Jews, prompting many of them to think that Palestine is meant to be there homeland. However the Jews were expelled from Israel by the Romans in 135AD and afterwards spread out in Europe, this is more commonly known as Diaspora. While in Europe they experienced many anti-Semitic attacks such as the Pogroms in Russia it was this that motivated Theodore Hertzle to unite Jews in the Zionist movement. ...read more.

They first started emigrating in large numbers around 1917 when the Balfour declaration became known. This was Britain supporting the Jewish idea of a homeland in Palestine. However Britain didn't just support the idea of a Jewish homeland they also supported the Arabs dream of an independent state in the McMahon- Husayn understandings in 1915. Instead of doing either, after the war Britain and France carved up the Middle East between them as agreed in a secret arrangement that had been decided before either the Balfour declaration or the McMahon understandings. This betrayal caused hatred of the British and of the opposing side because the Arabs didn't get the independent state they had dreamt of for centuries and the Jews didn't get the homeland they needed to get away from the anti-Semitism in Europe. After world war one Britain ruled Palestine under a mandate and allowed a steady flow of Jews in to the area that bought land and settled. ...read more.

the were doing their duty and the Arabs began to feel inferior and they felt that they could rule this land better than anyone. The next major influx of Jews was just after Hitler's rise to power in 1933 leading to new land purchases and Jewish settlements that angered the Arabs even more this climaxed in 1936 with the Arab revolt which lasted for three years. Britain did suppress it but afterwards reconsidered their governing policy and let out a white paper statement that limited future Jewish immigration. This however caused more agro because the Zionist believed it a betrayal of the Balfour declaration and thought this insensitive considering what the European Jews were going through under Hitler's rule in Germany. By the end of the second world war there were 1269000 Arabs living in Palestine and 608,000 Jews living under the British mandate and the Jews had bought 6-8% of the land which was 20% of the arable land. ...read more.