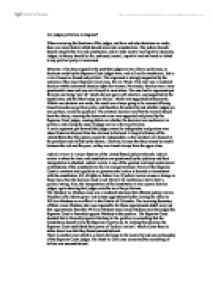 Are Judges Politicians In Disguise?

Are judges politicians in disguise? When reviewing the functions of the judges, and how and why decisions are made, there are many factors which should come into consideration. The judicial branch should interpret the law and constitution, and to make neutral and impartial decisions. Judges, in theory, should be fair, unbiased, neutral, impartial and not based or linked to any political party or movement. However, it has been argued in the past that judges are too alike to politicians, as decisions made by the Supreme Court judges have, and will not be mechanical, but in a lot of cases too biased and political. This argument is strongly supported by the outcome of the major Supreme Court case, Roe vs. Wade. This case was a landmark decision which concerned abortion rights for women. Previously, abortion was a very questionable issue and was not allowed in most states. The case had to arguments put forward, one being 'pro life' which did not agree with abortion, and supported by the republicans, and the other being 'pro choice', which was supported by democrats. Which ever decision was made, the result was always going to be accused of being biased towards one political party, and therefore the neutrality and whether judges are non partisan, would be questions. ...read more.

This is called judicial activism, as it is a tendency by judges to consider outcomes, attitudinal preferences, and other public policy issues in interpreting existing law. In scenarios when this could be questioned, the argument whether judges are too political can be answered by using judicial restraint. This is when judges limit their own power, unless they are clearly unconstitutional. When judges are appointed, it can raise the issue that the appointment and nomination is politically biased. When there becomes a vacancy in the supreme court by means of death, retirement, or the rare action of impeachment, the President nominates a candidate in which he think is suitable for the role. The president can appoint anyone who he wishes, but the nominee has to be confirmed by the senate, and the senate judiciary committee. The process begins and ends on the floor of the senate. In recent history, there has been a very controversial instance of the nomination process, in which GW Bush nominated Harriet Meirs to replace Sandra Day O'Connor after her retirement. The nomination was considered extremely controversial as Meirs was firstly not a judge, and also and ex political advisor of Bush. She was seen as only put forward for the position as she was a 'crony' of Bush, which was met with an objection from the public and from the senate. ...read more.

The Supreme Court judges also have a very large involvement with the people, and with civil rights. This again could encourage political involvement as may civil rights groups see the court as a way of achieving their goals. However the main point which questions the political involvement of judges is the fact that the range of issues that is dealt with by the judges and courts has increased and extended largely in recent years, as the courts now rule on issues such as the economy, which is generally seen as a politicians issue to deal with. Furthermore to this point, some institutions and groups may avoid reaching decisions, so the Supreme Court may take this responsibility. This could also increase political involvement. When Rehnquist was Chief Justice, he was expected to push the Supreme Court in a more conservative direction under his leadership. Many expected to see changes was in limiting the power of the federal government and in increasing the power of state governments. When Rehnquist died, John Roberts was appointed. The direction of the Roberts court has not been clearly defined as conservative or liberal. The political leanings of the current court have not been portrayed, therefore it is unfair to say the current court is too political, but evidence in the past could suggest that judges are politicians in disguise. ...read more.