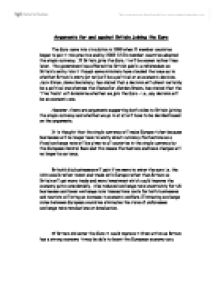 Arguments for and against Britainjoining the Euro.

Arguments for and against Britain joining the Euro The Euro came into circulation in 1999 when 11 member countries began to put it into practice and by 2002 12 EU member countries adopted the single currency. If Britain joins the Euro, it will be sooner rather than later. The government has offered the British public a referendum on Britain's entry into it though some ministers have clouded the issue as to whether Britain's entry (or not) will be a political or an economic decision. Jack Straw, Home Secretary, has stated that a decision will almost certainly be a political one whereas the Chancellor, Gordon Brown, has stated that the 'Five Tests' will determine whether we join the Euro - i.e., any decision will be an economic one. ...read more.

Also reduced exchange rate uncertainty for UK businesses and lower exchange rate transactions costs for both businesses and tourists will bring an increase in economic welfare. Eliminating exchange rates between European countries eliminates the risks of unforeseen exchange rate revaluations or devaluation. If Britain did enter the Euro it could improve it from within as Britain has a strong economy it may be able to boost the European economy as a whole. Also a European currency will strengthen European identity. Federal Europe is not necessarily going to be a consequence of a shared single currency. However there are arguments against the Euro which have so far prevented Britain entering the Euro in 2002. ...read more.

varying interest rates. The single currency had a political dimension- it has been said that it is another step on the road to federalism a "European super state". The single currency would only work if there is a tax harmonization. Trying to establish the same tax rate in the countries would be hard to achieve- ''one size fits all''. It may lead Britain to big rises in VAT and income tax. Britain's economy is different as we have a very large percentage of the population who own there own house. In a country such as Germany it is very rare for anyone to own their own house so this could mean that mortgages fluctuate and interest rates change. The British economy is now in a strong position with little fluctuation so joining the euro now may dampen the British economy. ...read more.