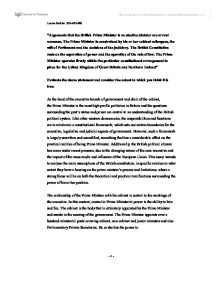 Arguments that the British Prime Minister is an elective dictator are arrant nonsense. The Prime Minister is constrained by his or her cabinet colleagues, the will of Parliament and the decisions of the judiciary. Discuss.

"Arguments that the British Prime Minister is an elective dictator are arrant nonsense. The Prime Minister is constrained by his or her cabinet colleagues, the will of Parliament and the decisions of the judiciary. The British Constitution rests on the separation of power and the operation of the rule of law. The Prime Minister operates firmly within the particular constitutional arrangement in place for the United Kingdom of Great Britain and Northern Ireland" Evaluate the above statement and consider the extent to which you think it is true. As the head of the executive branch of government and chair of the cabinet, the Prime Minister is the most high profile politician in Britain and the questions surrounding the post's status and power are central to an understanding of the British political system. Like other western democracies, the responsibilities and functions are in relation to a constitutional framework, which sets out certain boundaries for the executive, legislative and judicial aspects of government. However, such a framework is largely unwritten and uncodified, something that has a considerable effect on the practical realities of being Prime Minister. Additionally, the British political climate has come under recent pressure, due to the changing nature of the core executive and the impact of the mass media and influence of the European Union. This essay intends to analyse the main assumptions of the British constitution, in specific relation to what extent they have a bearing on the prime minister's powers and limitations, where a strong focus will be on both the theoretical and practical ramifications surrounding the power of his or her position. ...read more.

This access to the media gives the Prime Minister power over government colleagues. The nature of the British political system is far from straightforward, in that candid statements pointing to the Prime Minister's unlimited powers, or the spent tenets of the British constitution offer only inaccurate analysis. The concepts of a separation of powers and a rule of law are not in the realm of constitutional legality, largely due to the fact that the British constitution is unwritten and lives off custom and convention. Therefore the Prime Minister is perhaps not scrutinised, as he or she would be if the constitution were more legally grounded. However, these principles do serve as a sound basis for the making and evaluation of government policy. They promote the virtues of regularity, rationality and integrity on the part of those central to the parliamentary process. There are other, more subtle factors at work as well. The premiership is not just one individual, however his or her personal style is crucially important, as demonstrated by the contrasting leadership strategies of MrsThatcher, Mr Major and Mr Blair. Although there can be differences in style and circumstances, the Prime Ministers are fundamentally leaders. It is the Prime Minister's job to rise above cabinet issues and in this sense the Prime Minister is not a colleague, but the boss. With a close hold on the executive branch, as well as a considerable majority in parliament, Prime Ministers have the power to press their governmental programmes and policy-making agendas with undeniable authority. ...read more.